“This is not an open-close situation,” Sununu said. “This is not something we are coming out of tomorrow or even next week, frankly. We’ve always said public health has to be preeminent, has to be one of the key factors that we are looking at when we take any steps.” 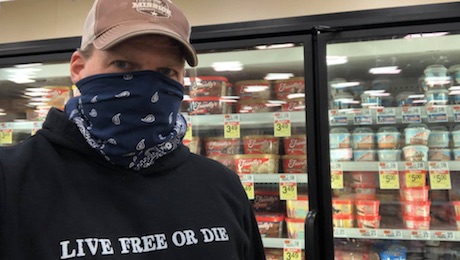 The state did not report any additional deaths related to the novel coronavirus Tuesday for the first time in a week, and the total for the outbreak remained at 42. Forty-four new positive cases were reported, bringing the state’s total to 1,491.

“Our numbers remain relatively stable,” said Dr. Benjamin Chan, state epidemiologist. “We continue to see a plateau in the number of new cases being diagnosed and the number of hospitalizations in terms of the daily hospital census.”

In a separate news release, Sununu said he has written to U.S. Health and Human Secretary Alex Azar and Treasury Secretary Steven Mnuchin to request an Affordable Care Act waiver so the state can pursue its own program. The waiver would begin in January of 2021 and last for five years.

The governor said the program had become unaffordable to some residents and many were not eligible for tax credits.

“We are hopeful that introducing a state-based reinsurance mechanism, based off the former Federal Transitional Reinsurance Program, to help fund high cost claims in the individual market would introduce more stability into the market by helping to make premiums more affordable for Granite Staters, as demonstrated in the actuarial analysis included as part of this application,” Sununu said in the letter. “This would make the market more attractive to current and possibly new issuers.”

The program would be administered by the New Hampshire Health plan, a nonprofit, the governor said.