New Hampshire Republican lawmakers are advancing a plan to blunt the impact of any executive orders by President Joe Biden tightening firearm regulations following a recent spate of mass shootings.

Senate Bill 154, which was approved by the state Senate last Thursday, would prohibit the state from enforcing any presidential executive order “restricting, limiting, encumbering, regulating, or placing conditions upon the right of the people to keep and bear arms.”

The measure passed 14-10 in a vote that went along party lines, with Democrats against it. 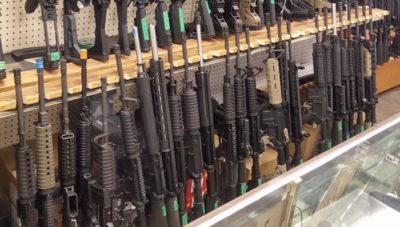 New Hampshire’s Senate Bill 154 would prohibit the state from enforcing any presidential executive order “restricting, limiting, encumbering, regulating, or placing conditions upon the right of the people to keep and bear arms.”

The bill’s primary sponsor, Senate Majority Leader Jeb Bradley, R-Wolfeboro, said it would “protect the rights of New Hampshire citizens to defend themselves and their loved ones” if the Biden administration issues any executive orders “restricting an individual’s ability to keep and bear arms.”

“New Hampshire is among the safest states in America because we have effective law enforcement and allow people to exercise their constitutional rights under the 2nd Amendment,” Bradley said in a statement.

“I don’t suppose it’s (the bill’s) proponents suddenly got religion on executive authority after four years of executive orders by the previous president, many of which were blocked by the courts,” Waters said ahead of the vote. “I didn’t hear much opposition in this body to the muslim ban, or to attempting to divert state resources to building a wall.”

Sen. Jay Kahn, D-Keene, criticized the measure as a “political statement” that will have “no impact on the lives of the people of New Hampshire.”

“I think its timing is rather insensitive to some things that are happening in our society today,” he said.

The Senate also approved a bill that will shift responsibility for conducting background checks on certain gun sales from the state police to the Federal Bureau of Investigation.

“Under this bill, all of those things take place, and just as importantly, the lives and the safety of the citizens of New Hampshire are not jeopardized,” he said.

The FBI currently conducts background checks for rifles and shotgun purchases made in New Hampshire, but not for other firearms.

The state has been criticized for problems with its background check system, which is operated by the state police.

Biden hasn’t said whether he will be signing any executive orders on gun control as he approaches his 100th day in office, but pledged to do so on the campaign trail.

The issue of gun control in Washington was rekindled following recent back-to-back mass shootings in Boulder, Colorado, and Atlanta, Georgia, that claimed at least 18 lives.

Democrats in Congress have filed proposals for a ban on assault-style weapons as well as broadening background checks to include mental health evaluations.