While most of the Democratic presidential candidates are spending a significant amount of time in Iowa, at least one of them is betting hard on New Hampshire.

Congresswoman Tulsi Gabbard of Hawaii has reportedly rented a house in the Granite State and is living there full time as she campaigns.

Iowa will hold its Democratic caucuses Feb.3, the first primary event in the country, followed eight days later by the New Hampshire primary. 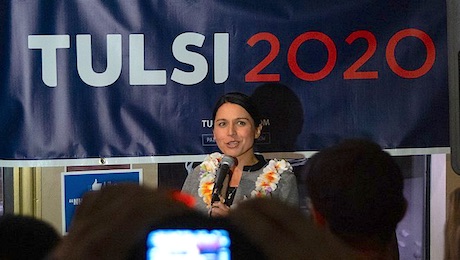 Tulsi Gabbard, U.S. Representative for Hawaii’s 2nd congressional district, has moved to the Granite State temporarily as a home base for her presidential campaign.

Gabbard is polling in single digits both in New Hampshire and nationally and has yet to qualify for the Democratic National Committee’s Dec. 19 debate.

Biden was joined in New Hampshire late last week for several campaign stops by former Secretary of State John Kerry, who announced his endorsement of Biden. The former Delaware senator also held two events in the state Sunday after spending the majority of last week in Iowa.

Buttigieg and Warren also made campaign stops late last week before heading back to Iowa for weekend forums. A townhall hosted by California businessman Andrew Yang was marred by reports of emailed threats to his campaign headquarters. About 100 people attended along with an extra police presence. Warren’s New Hampshire campaign offices had earlier in the fall been broken into.

Former Maryland Congressman John Delaney is next up to participate in a candidate forum hosted by the New Hampshire Union Leader. That will be held Tuesday afternoon and he has three other appearances scheduled for Monday. The candidate forum series is co-sponsored by the Community College System of New Hampshire.

On the other end of the spectrum from Gabbard, former San Antonio Mayor Julian Castro last month fired his New Hampshire campaign staff, instead choosing to focus on Iowa and other early primary states.

One thought on “New Hampshire heating up for Democratic hopefuls”