New Hampshire business groups are urging members of the state’s congressional delegation to reject a Biden administration plan that would force banks to turn over customers’ account information, even after the proposal was scaled back.

The proposal, which is part of President Joe Biden’s multi-trillion-dollar “Build Back Better” plan being considered by Congress, would require banks to report to the Internal Revenue Service any account with more than $10,000 in activity in a year. The move is aimed at generating money for the plan by preventing wealthy tax evaders from hiding their money. 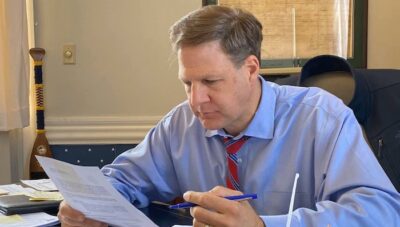 Besides concerns about consumer privacy, New Hampshire Gov. Chris Sununu said the plan would become a burden to the state’s financial institutions and consumers.

House Democrats and the White House agreed to a scaled-back proposal from a previous $600 reporting threshold, but business groups say the new plan isn’t much better.

In a letter to the state’s congressional delegation, the New Hampshire Bankers Association and two dozen other business groups urged them to reject the proposal.

“We believe this program infringes on fundamental privacy rights, is costly for all involved, does not achieve the desired result, impacts nearly all Granite Staters with a bank account, and has the potential for unintended and serious negative consequences,” the business groups wrote to lawmakers.

The groups acknowledged that effort is aimed at preventing wealthy taxpayers from evading their obligations but said it “would impact virtually every Granite Stater with a bank account and violate their fundamental privacy rights.”

Members of the all-Democrat congressional delegation, including U.S. Sen. Jeanne Shaheen, were opposed to the previous $600 threshold but haven’t raised concerns about the new plan.

Republican Gov. Chris Sununu wrote to the congressional delegation earlier this month urging them to reject the proposal under the previously proposed $600 threshold.

Besides concerns about consumer privacy, Sununu said the plan would become a burden to the state’s financial institutions and consumers.

“Smaller banks and credit unions will be disproportionately impacted by the increased costs and regulatory burdens created by this proposal, which may also drive individuals to leave the banking system to avoid government intrusion into their personal financial affairs,” Sununu wrote to lawmakers.

Biden’s “Build Back Better” proposal is a sweeping package of legislation aimed at addressing climate change, infrastructure and social programs.

The plan has been downsized to $2 trillion from an initial $3.5 trillion proposal as Biden tries to win support from centrist Democrats raise who’ve concerns about the overall price tag.

Biden has also proposed new tax increases on corporations and individuals earning more than $400,000 a year to help pay for the massive, multi-year spending plan.

But the left-leaning Center for American Progress said the Biden administration’s bank reporting proposal is a “critical element” of the plan that will help catch wealthy tax cheats and drum up more money for crucial federal programs and initiatives.

“It gives the IRS some visibility into opaque forms of income that disproportionately accrue to high-income individuals,” the group said in a statement. “Despite fear mongering from bank lobbies, the proposal protects taxpayers’ privacy while simply requiring banks to provide basic, aggregated information about flows.”