Transportation in the Green Mountain State may be headed down a green path thanks to a new coalition that aims to promote electricity-based transportation for all. 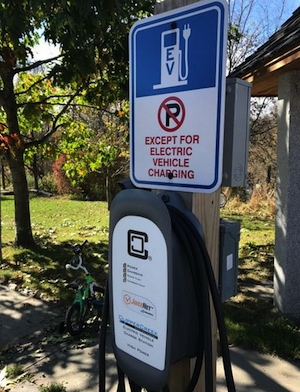 SHOCK TREATMENT: Transportation for Vermonters, a newly formed coalition of environmentalists, seeks an electricity-based future for transit in the Green Mountain State.

The coalition, Transportation for Vermonters, was formed from a diverse array of organizations that believe quality of life can be improved in Vermont by reducing emissions produced by everyday travel.

About 50 percent of greenhouse gasses emitted into the atmosphere comes from gasoline and diesel vehicles. Moreover, transportation makes up 35 percent of all energy used in Vermont.

Earlier this month, the coalition appeared together at the Vermont Climate Change and Energy Summit to discuss ways to change the current transportation system.

For decades, transit busses in Vermont have run on diesel fuel. Spokespersons for the coalition say the exhaust can be dangerous to the health and well-being of drivers and passersby alike. The goal is to switch Vermonters to electric transit, which has lower emissions on the road than diesel and gas vehicles.

Kate McCarthy, sustainable communities program director at Vermont Natural Resources Council, said the coalition will be doing extensive research to determine what transportation investments will be most efficient and what policies to consider when implementing these changes.

“That’s going to be very important because transportation in Vermont has to be a system that serves people at a lot of different scales. There’s no one side to it,” she said.

McCarthy said switching to electric transportation would positively impact the economy and allow Vermonters to get to their jobs in reliable ways. Some Vermonters, especially those living in secluded areas, struggle to get to work due to unreliable means of transportation.

“(Transportation) is like tendons; it holds us together,” McCarthy said. “A really good investment in transportation can serve multiple benefits.”

According to the coalition’s research on the topic, Vermonters using electric transportation can expect to save a substantial amount of money on daily commutes. Currently, diesel transit busses get a mere 4.5 miles to the gallon, which contributes to the overall cost of public transportation.

Dan Hoxworth, executive director of Capstone Community Action, said Vermont has done a great job providing sustainable energy in people’s homes that reduces the cost of electricity by 25 percent, but the state has not yet scratched the surface in the transportation sector.

“I think by focusing on this we’re really trying to ensure that all Vermonters, regardless of their economic circumstances, can successfully transition into a climate economy,” he said.

He added that the environmental cost of fossil fuels is growing exponentially every day, and the sooner Vermont transitions to renewable energy, the better it would be for the environment and Vermonters’ health.

“I think it is truly the next frontier for us in Vermont to tackle these questions around transportation,” Hoxworth said. “If we make the right strategic choices, it will also make us much more competitive economically with other states.”