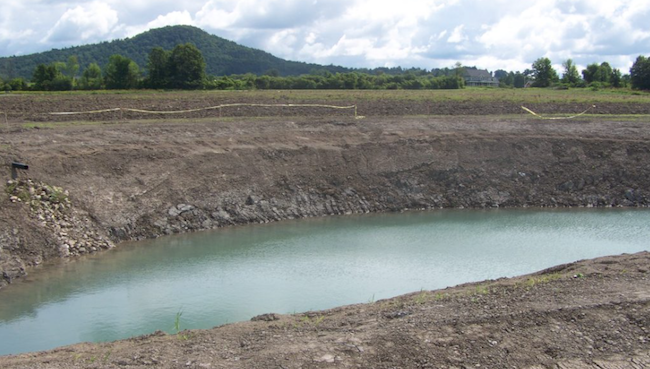 A group of Charlotte, Vt., neighbors, including the owner of an adjoining organic wheat farm, opposes the construction of a large hop farm located near U.S. Route 7.

CHARLOTTE, Vt. — Vermont is thought to be friendly to farms and farmers, but a new hop farm under construction has surrounding neighbors, including an organic wheat farmer, saying “not in my backyard.”

A group of neighbors abutting what will become the largest commercial hop farming operation in Vermont are hoping to stop landowner Peter Briggs from developing a portion of his 59-acre tract.

The new hops business, Mt. Philo Hops, is located west of the intersection of U.S. Route 7 and East Thompson’s Point Road in Charlotte.

Craft beers, with several nationally popular labels being made in Vermont, use hops as a flavoring and stabilizing ingredient. The seed cones, or strobiles of the hops plant, are valued for imparting a zesty — some say bitter or “hoppy” — quality to the beers.

While the hop farm is legally permitted in an agricultural-zoned area, some neighbors say it’s too large — as well as too water- and chemical-intensive — for its heavy, lake-clay soil site. The surrounding land to the farm was once the bottom of the prehistoric predecessor of nearby Lake Champlain, called Glacial Lake Vermont.

Organic wheat farmer Peter Demick, one of the neighbors involved in the dispute, told True North Reports he sees the Mt. Philo Hops undertaking as one wealthy man’s rash move to cash in on the microbrew-beer craze.

According to Demick, Briggs owns multiple residences in Vermont and New York and is affiliated with Alvarez & Marsal, a global “turnaround management” firm. Demick claimed that since Hinsdale didn’t like his neighbors at the time of the sale to Briggs, “This was his payback to all of us.”

Even as Briggs prepares 35 acres of the 59-acre parcel for the spring 2018 planting of the tall-climbing hop vines, neighbors are organized to protest the effort. They say the non-organic farm will use pesticides and herbicides typical of other hop yards in the Northeast.

Demick, a member of the Northeast Organic Farming Association of Vermont, grows organic wheat in an adjoining field for the Nitty Gritty Grain Co. of Charlotte. He also works as a master stone mason with Vermont Walkways and Stone Preservation.

“Mr. Briggs dropped by during my son’s wedding which we held in our barn,” Demick said. “He started telling me all about his grand plans, but I was skeptical from the start. You see, hop yards are typically sited in remote places, away from residential areas, because of the heavy spraying and water requirements. Mr. Briggs couldn’t have a picked a less desirable place for growing commercial hops.”

Since his encounter with Briggs, Demick began organizing with surrounding neighbors to stop the agricultural project. Among his concerns are the possible negative effects on wildlife and the fear that toxic runoff from pesticide and fungicide spraying will affect the watershed of nearby Thorpe Brook, as well as the hop farm’s own irrigation catch ponds.

“The 59.1 acre commercial hops operation … would be an unprecedented land use in crop type, crop acreage, and operational scale for Charlotte,” states a letter sent from neighbors to the Charlotte Selectboard earlier this month.

The letter, signed by Demick and 28 other individuals living in the farm’s vicinity, cites water quality as a top worry:

The hops operation will use pesticides for disease and pest control. Many of the pesticides approved for hops are toxic to aquatic life, according to the EPA labels. It is possible and likely that the irrigation pond water will accumulate and concentrate pesticide residues over time which would end up directly discharging to (nearby) Thorpe Brook when the pond reaches capacity. The Charlotte Town Plan values Thorpe Brook as Significant Wildlife Habitat as designated by both the town and State of Vermont, and supports protection from contamination of this important natural resource.

While Demick concedes that Briggs’ hops operation fits the agricultural zone in which it is being laid out, he insists that it is not appropriate to be so close to the many residences in the area.

“Look, we have kids here, (and) Derek and Kate Chase live 20 feet from the hop farm line. And we have many innocent birds in the area such as hawks and eagles,” Demick told True North standing on the boundary between his wheat farm and Mt. Philo Hops.

“See those birds flying over the hop field now? They’re catching rodents to eat. Now when this field is planted next year, and then the hops are sprayed, those birds will eat the sprayed mice. This will be an unhealthy situation. And since I grow organic wheat, that stuff will blow onto my fields, too.”

Another objection by Demick and his neighbors is that Mt. Philo Hops will erect 1,300 18-foot-tall wooden poles and trellising cables for the hop vines to climb on.

“This will look like a concentration camp when it’s completed,” Demick said. “It will also block the view of Mt. Philo that we’ve tried to maintain over the years.”

Jeff Martin, another neighbor opposed to the farming operation, recently took his concerns to local planning officials in hopes that they might get involved.

“There are 20 houses affected by this operation,” Martin told Charlotte Planning Commission members at an Aug. 3 meeting. “We have significant concerns about the impact of this farm on water quality and usage, air quality, soil contamination, protection of our septic fields and several other issues.”

At the Aug. 3 meeting, Planning Commission Chair Jeffrey McDonald told attendees that agriculture is exempt in the area but that the town can ask the landowner to honor 50-foot setbacks for structures.

“(We) have issued a letter advising the landowner to move (a temporary farm shed) by Sept. 8 or get a letter from the Secretary (of Agriculture).  … We can’t do anything unless we have guidance,” McDonald said, adding that he must wait on the state to weigh in since the hop farm is something new.

Neighbors have told town officials that the hop yard trellis structures might trigger an Act 250 review. They also asked the state to conduct water quality and soil tests for future use of pesticides.

“The town plan talks about a balance of agriculture and public health and safety. … The level of pesticide use associated with these hops operations is unprecedented,” Patrice DeMarco, a nurse, told town officials at the planning commission meeting. “There’s a reason that they haven’t been grown in Vermont.”

Linda Samter, another neighbor opposing the project, said she contacted the Vermont Land Trust and Agency of Agriculture about the hop farm, and has asked the planning commission to review the hops farm as it relates to “residential, scenic and water quality resources.”

She also encouraged officials to get Briggs to submit a site plan with detailed information regarding the hops pole layout, water well yields and septic.

Expecting an even bigger public turnout than the Aug. 3 planning commission meeting, Demick, Martin, DeMarco and Samter — and fellow neighbors opposing Mt. Philo Hops — plan to raise the issue before the Charlotte Selectboard at its Aug. 28 meeting.