When President Lyndon Johnson signed the Elementary and Secondary Education Act into law in 1965, he vowed the unprecedented new federal intervention in K-12 education would “bridge the gap between helplessness and hope” for “educationally deprived children.”

When President George W. Bush began making the case for No Child Left Behind, he elegantly stated that his federal education policies would end the “soft bigotry of low expectations.” 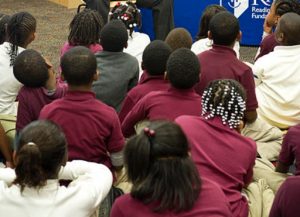 On Tuesday, the National Center for Education Statistics at the Department of Education released the highly anticipated results of the 2017 National Assessment of Educational Progress, or NAEP. The scores are a particular indictment of Obama-era education policies.

And when President Barack Obama signed into law the American Reinvestment and Recovery Act, more commonly known as the “stimulus”—sending an unprecedented $98 billion to the Department of Education—he said that it represented “the largest investment in education in our nation’s history” and would ensure American children wouldn’t be “out-educated” on the international stage.

Yet more than half a century after Johnson signed Elementary and Secondary Education Act into law, and 38 years after the Department of Education became operational, it has become clear that federal intervention in K-12 education has failed to achieve its primary goal: reducing gaps in academic outcomes between disadvantaged students and their more advantaged peers.

On Tuesday, the National Center for Education Statistics at the Department of Education released the highly anticipated results of the 2017 National Assessment of Educational Progress, often referred to as the nation’s “report card,” underscoring that point.

The scores are a particular indictment of Obama-era education policies, including historically high levels of spending, the addition of new programs, numerous federal directives, and perhaps most consequentially, Common Core.

Here are the key results.

Both the math and reading scores on the National Assessment of Educational Progress are measured on a point scale of 0 to 500.

In terms of the percentage of American students considered proficient in math and reading, the 2017 report card has little to cheer.

Although the 2017 scores are uninspiring, they should be particularly concerning when considered in conjunction with the 2015 results, the most recent release prior to this year’s report card.

The 2015 National Assessment of Education Progress represented the first time math and reading scores had declined or remained stagnant since the test was first administered in 1990. Further declines and an overall stagnation in 2017 suggest a trend—namely, scores are going in the wrong direction.

Forty-nine out of 50 states were stagnant on the 2017 report card, and achievement gaps persist. Historically, federal education spending has been appropriated to close gaps, yet this spending—more than $2 trillion in inflation-adjusted spending at the federal level alone since 1965—has utterly failed to achieve that goal.

Increasing federal intervention over the past half-century, and the resulting burden of complying with federal programs, rules, and regulations, have created a parasitic relationship with federal education programs and states, and is straining the time and resources of local schools.

Instead of responding first to students, parents, and taxpayers, federal education micromanagement has encouraged state education systems and local school districts to orient their focus to the demands of Washington.

Instead of building on the failed policies of the past and continuing top-down education mandates from Washington, a drastically different approach should be taken to significantly limit federal meddling in education and to empower state and local leaders.

It is time for the federal government to re-examine its intervention in local school policy.