According to the group’s press release, hydropower has long been a key component to the Green Mountain State’s power grid.

“Hydropower has been the backbone of Vermont’s electricity generation since the late 1700s, when many dams were built to power grain mills. Today, VPPSA members own nine hydropower facilities with a total generating capacity of 21.9 megawatts (MW). In 2018, public-owned hydropower accounted for 14 percent of VPPSA’s energy portfolio,” the statement reads. 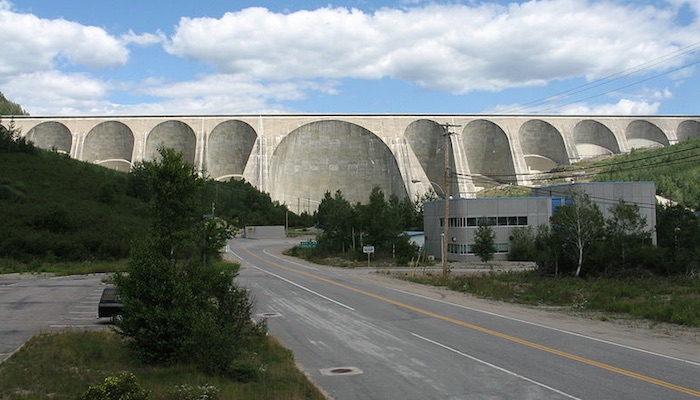 HYDRO DAY: The Daniel-Johnson Dam, located north of Baia-Comeau, Quebec, is the cornerstone of Hydro-Quebec’s Manic-cinq hydroelectric complex.  National Hydropower Day took place on Aug. 23, and while the power potential of water is huge, it comes in different forms and costs, both economic and to the environment.

“One of our members, Swanton Village, is 100 percent renewable largely due to generation from the Orman Croft Hydroelectric facility,” he said.

The VPPA boasts eight member-owned hydropower facilities which are “run-of-the-river” style. That operation is said to “have the lowest impact on water quality and ecology,” according to the group. The Low Impact Hydropower Institute certifies dams to ensure that they meet specific “high environmental, cultural, and recreational standards.”

But William Short, an energy consultant for New England, says not all is rosy for hydropower, especially when it comes to Hydro-Quebec. On the environmental front, he noted that huge amounts of land were filled with water, displacing indigenous people.

“HQ [Hydro Quebec] has inundated the land area of Connecticut, Rhode Island, and Massachusets since 1960,” Short said. “That’s how large the reservoir system is. Basically, 38,000 megawatts of generation and the cost is essentially what amounts to about a third of the landmass of New England underwater.”

Short said Hydro-Quebec is held to different standards than hydropower in New England. “They certainly wouldn’t be certifiable by the Low Impact Hydropower Institute,” he said.

“Don’t get the idea that you are getting a great deal,” Short said of Hydro-Quebec.

Gov. Phil Scott, who largely ran for office in 2016 on opposition to industrial wind power, is a solid proponent of hydropower.

“I think we can attain 90 percent renewables by 2050, but it’s going to take some technology changes,” Scott said. “It’s going to take utilizing some of those rich renewable sources to the north [Hydro-Quebec].”

On a local scale, hydropower can have its issues. In July 2018, Hardwick Electric director Mike Sullivan stated that the Wolcott Dam, which delivers 10 percent of the company’s power production, was in need of more than a quarter-million dollars in repairs.

Sullivan told the Hardwick Selectboard that state agencies were in disagreement over what to do with it.

“There’s conflict between the Public Utility Commission who has authority over us and over that dam and ANR [the Agency of Natural Resources], the DEC [the Department of Environmental Conservation], and all the other regulation agencies and environmental agencies in the state, because they don’t want any releases,” he said.

Bill Scully, a Bennington Selectboard member and hydro station owner, likewise said hydropower has varying costs and benefits. He wrote a comprehensive paper on renewables which can be read online.

Scully argues there’s an existing energy storage technology which may be the answer to efficiently store energy without expensive batteries made of toxic materials.

“Pump storage is when you can take hydro, wind, and solar, any or all of them to power pumps that then pump out of a water supply, it might be a large lake or a river, up to a storage facility up high,” he wrote. “And then these same pumps are also generators for when the water is released and goes down.”