The Vermont National Guard is using at least $200,000 to build and rebuild a makeshift hospital that in the spring served just 23 COVID-19 patients.

The hospital, which was rebuilt in recent weeks at the Champlain Valley Exposition Center, holds 250 beds, including 50 designated for COVID-19 patients.

The extra 200 beds are for “just in case something happens,” according to Capt. Mike Arcovitch, who spoke with True North about the project. Arcovitch says COVID patients would not be included in the larger section.

“It’s more of a planning factor — you know, just in case something happens, were it needed,” he said. “[We’re] hoping that it’s not needed but we just want to make sure that we’re ready. Obviously, it’s related to COVID, but we are ready to use it if we need to.” 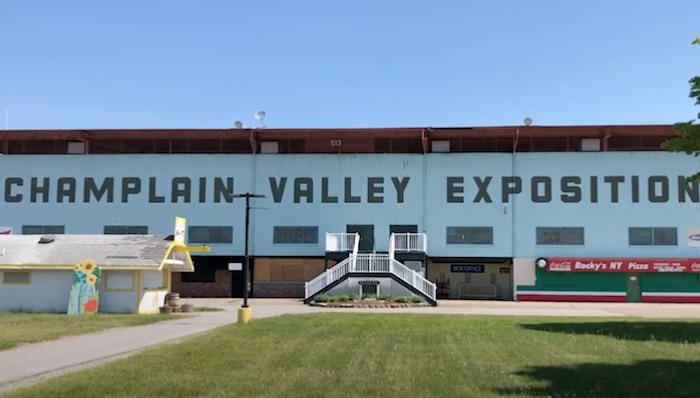 The Champlain Valley Exposition Center is the location of a makeshift hospital that may be used to treat COVID-19 patients if needed.

The facility is not being built again to address the recent surge in COVID-19 cases, but as a precautionary measure.

“I would say that it’s a surge location that’s more of a just-in-case, so we were asked to construct four 50-pod beds for just general admissions like trips, bumps, that kind of stuff. And then there is a 50-pod COVID section as well,” Arcovitch said.

As of Thursday, Vermont has three people in ICU and 29 total Vermonters hospitalized with COVID-19. During this flu season, which runs fall and winter, 17 Vermonters have died with COVID-19 as one of the causes listed. A total of 75 people have died in Vermont in 2020.

For the first 58 deaths in Vermont, the average age of the victims was 77, and included multiple extra medical conditions.

Back in the spring, the unit constructed by the Vermont National Guard had 400 beds and was finished in April. This new facility uses all the same parts as the first one, but new labor costs were incurred during the five days that guardsmen worked to reconstruct the facility. Arcovich didn’t have a figure for the new labor costs, but about 30 workers were involved in the project.

According to Arcovitch, the $200,000 expense, which is reimbursable through the federal government, is low compared to similar projects in other states.

According to a Fox News report, makeshift hospitals totaling millions of dollars went mostly unused in the New York City area during the early months of COVID-19. “The three additional field hospitals Albany spent many millions on erecting in late March are yet to close, despite treating few, and are standing idle in case there is a second wave of the disease,” the report states.

Arcovitch reiterated that this facility was not necessarily rebuilt just because of new cases.

“I would be speculating,” he said. ” They asked us to set it up, they said that that they want to make sure that we are ready in case it’s needed. That’s what we’re here for, to support the state whenever they need us for something like this.”

The facility is not staffed for the moment, Arcovitch said, and there won’t be any staff unless the beds start to fill up.

Archovich said that building the makeshift hospital is not the only thing that the Vermont National Guard has been busy with.

“We have folks doing the mission of supporting the state’s COVID response in a variety of ways.  We have pop-up sampling sites that go up all over the state, and we recently were asked to provide some service members to the state as part of the voluntary COVID mapping — It’s essentially contact tracing,” he said.