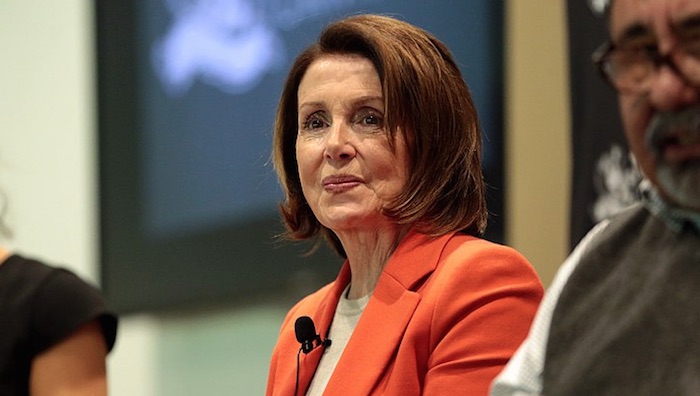 Rep. Nancy Pelosi, D-Calif., says Democrats will undo the Trump tax cuts if they regain control of the U.S. House of Representatives in November.

House Minority Leader Nancy Pelosi vowed Wednesday that Democrats will rework the GOP tax bill if they successfully retake the House in the 2018 midterm elections.

Speaking at a Culver City town hall event as part of the “Repeal the Trump Tax” tour, Pelosi pledged that Democrats would overhaul the tax bill into one that “creates growth, creates good-paying jobs, as it reduces the deficit.”

“Over 80 percent of the benefits go to the top 1 percent,” Pelosi said of the GOP tax cuts. “Eighty-six million middle-class families will see a tax increase while they advertise it as a middle-class bill.”

According to the non-partisan Tax Policy Center, the average household will receive a tax cut of $1,610 in 2018. Only 5 percent of taxpayers will see increased taxes in 2018.

California Democratic Rep. Ted Lieu, speaking alongside Pelosi at the event, said the GOP tax cuts would result in “deep cuts to Social Security, to Medicare, to all these critical programs that serve a lot of Americans.”

Pelosi didn’t offer specifics when asked if Democrats would re-work the bill from scratch or focus on specific portions, saying instead her party would work openly with Republicans to reach a deal.

“One of our complaints about what they did with the tax bill is they did it in the dark of night with the speed of light,” the California Democrat said.

“We’ll sit down at the table and say … what would be a tax bill that creates growth, that creates good paying jobs as it reduces the deficit?” she said.

“It’s not about chipping at this piece or that piece, it’s about a comprehensive look at what our tax policy should be for the future,” she added.

“Secondly, we would do it so it would be transparent so that people could understand the ramifications of this, that or the other,” Pelosi promised.

Pelosi’s comments Wednesday comes after she said in February that Democrats would have to “replace and repeal” the GOP tax bill once retaking the House.

“It may have to be a ‘replace and repeal’ — replace them and repeal the bill,” Pelosi said.

Senate Minority Leader Chuck Schumer offered a more specific proposal towards reworking the GOP tax plan in March. His plan called for a number of tax hikes, including lifting the corporate tax rate to 25 percent, raising the income tax rate to 39.6 percent for high earning Americans and slashing the carried-interest tax loophole.

“We want to roll back the Republicans’ tax giveaways to corporations and the wealthy and invest that money instead in jobs and infrastructure,” Schumer said.

Public opinion polls indicate that voters are warming to the GOP tax bill. Fifty percent of respondents in a February poll from The New York Times and SurveyMonkey approved of the GOP tax overhaul, up from 37 percent approval in December.