The number of candidates for statewide office affiliated with the gubernatorial campaign of John Klar now totals about 25 — with more to come.

While it remains to be seen whether Klar can win his Aug. 11 primary challenge of Gov. Phil Scott, the Brookfield lawyer and addiction recovery coach has accomplished what few Vermont candidates for governor in living memory have done: recruited and supported more than a score of candidates. Running amid a pandemic that has rendered obsolete many standard campaign techniques, he’s achieved this without a big political donor or machine, or even an office, unless you count his high-mileage car.

Journalists consider an event “news” if it’s uncommon, interesting or important. By this standard, the coalescing of two dozen unknowns under one insurgent political banner is political news in Vermont — something both VPR and WCAX tacitly noted by sending reporters to cover yesterday’s press conference on the lawn of the Vermont State House, home of the Vermont Legislature, which Klar refers to as  “the bloated tick.”

“We now have a situation where we’re all working for them,” Klar said. “The money is transferring from us to them. They’re not working to enrich our prosperity, they are diminishing our prosperity to enrich their own.” 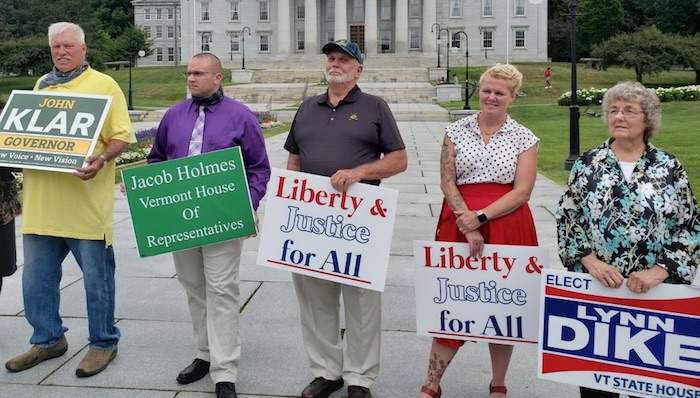 From left to right, Stuart Beam of Springfield, Jacob Holmes of Hartford, Charles Wilson of Lyndon, Sherri Prouty of Rutland, and Lynn Dike of Bristol.

Standing behind Klar yesterday were many political newcomers, including Stuart Beam of Springfield, Jacob Holmes of Hartford, Charles Wilson of Lyndon, Sherri Prouty of Rutland, and Lynn Dike of Bristol. They have much in common: they all live outside the Chittenden/Washington county power bubble, are new to politics, and are willing to run and serve.

All five of their names will appear on the Nov. 3 general election ballot. Republican State House candidates aren’t fighting each other in primaries (only Williamstown has a House primary, and there are none for the Senate seats).

Stuart Beam, running for the Windsor 3-2 (Springfield) house seat, was born and raised in Bellows Falls. He joined the army but after an injury, moved to Springfield. Stuart has been a farmer and truck driver most of his life. Last year he retired after 40 years of driving trucks across the U.S. and Canada. He  has started farming again. Stuart is married with four children and has been an active member of his church for 28 years. When asked yesterday why he’s running, he said, “I just want to help people.”

Jacob Holmes (Windsor-1 House seat) was born and raised in Hartland. After receiving a BA in psychology from Castleton State College, he served in the Vermont Army National Guard for six years. He graduated from Southern New Hampshire University with high honors in Criminal Justice. He’s a cop with the Woodstock Police Department. He says his “focus will be on supporting law enforcement as well as emergency personnel whose main goal is to keep the community safe.”

Charles Wilson (Caledonia County Senate) is a former farmer and retired house painter living in Lyndon. He and his wife still operate a small business. He’s concerned about eroding First and Second Amendment rights, overregulation of dairy farms, and “the rights of the unborn taken away without mercy.”

Sherri Prouty (House seat for Rutland City Ward 5-4) has been married for 27 years, raised 4 children and has 3 grandchildren. (She says she doesn’t think she’s related to longtime Vermont senator Winston Prouty.) She has worked in law enforcement as an officer and school resource officer, supported soldiers, veterans and their families in the Vermont National Guard, assisted citizens with job placement with sustainability, and owned her own business.

“We need tax incentives for our business community along with a strategic plan to bring businesses to the various regions. We need to support systems that help people become successful, productive community members, through investment in job skills and training to develop our workforce. We also want our citizens to stay in Vermont when they retire, not move to another state,” she said.

Lynn Dike (Addison-4 House seat) is the oldest of nine children. She started her nursing career in 1969 as a nurse’s aide, continuing her education when able, and graduating from Norwich University in 1986. Working most in Nursing and Rehab centers, she has also taught LNA classes, childbirth classes and ended her career as an RN. She moved to Bristol in 1992. She and husband Lloyd grow huge vegetable gardens and make apple cider in the fall and maple syrup in the spring.

Rally for police planned for this weekend

A rally to support Vermont law enforcement will be held 11 a.m. July 25 on the Vermont State House lawn. The main organizer is the son of a Vermont police officer who believes it’s time to honor those who protect and serve with a positive display of citizen support. He reports that interest around the state is very high. Mark your calendars.