The Department of Justice on Tuesday announced that more than 14,200 defendants have been charged with firearms-related crimes during fiscal year 2020.

The U.S. Attorney’s Office for the District of Vermont is responsible for at least 27 firearms-related prosecutions, accounting for about a quarter of the office’s total caseload. Ten of these cases involved domestic violence. 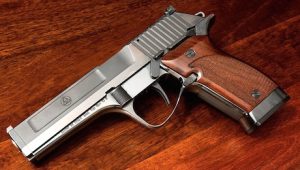 GUNS AND CRIME: The Department of Justice says that more than 14,200 defendants were charged with firearms-related crimes throughout fiscal year 2020.

Some of the individuals were involved in fatal shooting incidents, including the April 2019 death of Benzel Hampton in Burlington’s Old North End. Another related to the October 2018 shooting death of Michael Pimental near Concord.

Five defendants were charged with making false statements while obtaining or attempting to obtain a firearm from a federally licensed dealer.

Technology plays a key role in solving gun crimes. A press release from the DOJ states that investigators are “using all modern technologies available to law enforcement such as the National Integrated Ballistic Information Network (NIBIN) to promote gun crime intelligence.”

According to the Bureau of Alcohol, Tobacco, Firearms and Explosives (ATF), NIBIN is the only national system that allows for “the capture and comparison of ballistic evidence to aid in solving and preventing violent crimes involving firearms.”

“We’re going to extend it because we are seeing some good results and as long as we’re taking chronic violent offenders off the street we’re going to double down and continue to push,” Barr said in September.

The release touts a program called Project Guardian, which is described as a “signature initiative to reduce gun violence and enforce federal firearms laws.” It was initiated by Barr in the fall of 2019.

Project Guardian enhances coordination of federal, state, local, and tribal authorities in investigating and prosecuting firearm use and possession crimes.

A partnership between the U.S. Attorneys’ Offices and ATF is largely credited for these efforts.

“Every day the men and women of ATF pursue and investigate those who use firearms to commit violent crimes in our communities, many of whom are prohibited from possessing firearms from previous convictions,” Lombardo said.

The issue of gun violence was brought up in the first presidential debate between President Donald Trump and Democrat challenger Joe Biden.

“If you look at Chicago, what’s going on in Chicago, where 53 people were shot and eight died,” Trump said in reference to one recent deadly weekend in the city.

In Chicago, police have reported 3,110 shooting victims citywide through Sept. 30, compared with 1,999 victims during the same stretch in 2019.

3 thoughts on “More than 14,200 charged with firearms-related crimes during fiscal year 2020”