MONTPELIER, Vt. — Moms Demand Action for Gun Sense in America visited the capital and held what was advertised as a public meeting, only to turn away about a dozen pro-gun rights guests at the door. 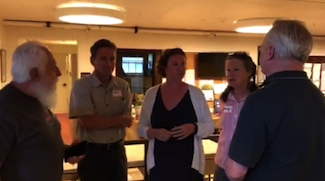 They even called the police on people who arrived to attend the Tuesday night meeting.

Montpelier police officer Kevin Moulton told True North that when he went in to the meeting to address the situation, he was told the space was rented out, meaning organizers were “within their legal right” to make it private even after advertising it as public.

The meeting was originally scheduled at the Unitarian Church in Montpelier, but instead it took place at an office building about a half mile away on Barre Street.

That was not the only change of plans.

“Well I RSVP’d online as I was requested,” Richard Ley from Clarendon told True North. “I have received emails from them, and I drove an hour and a half to be at the meeting here tonight to find that the venue we arrived at was closed, with no address to attend the meeting which they held at a different location. 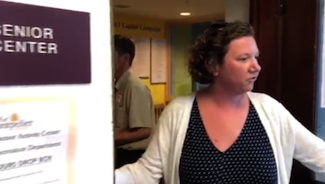 The door was closed after locals were ushered out while being told police had been called to the scene.

“I’m very disappointed in the fact that they would do that to me,” he said.

Ley said he simply wanted to attend the meeting since it was touted as a community conversation. “Instead I was turned away at the door,” he said.

Archie Flower, a resident of Middlebury who drove a long distance to attend the meeting, said he thought the group didn’t follow-through on information it sent out to the public.

Still, he said it was worth the drive to talk with others about gun rights and politics.

“I still wanted to talk with those people because, you know, the best disinfectant for bad ideas is sunlight,” he said. “ … But they didn’t want to talk.”

About a dozen people — all Vermonters who believe in protecting gun rights — were kept out of the meeting.

“I received an email confirmation only to be told I had to be a member or invited by a member to get in,” Justin Farrar of Springfield said.

Bill Robinson of Warren also made the drive to Montpelier, only to be shut out.

Eddie Cutler, president of Gun Owners of Vermont, said the group may have been within its rights but handled the situation in a way that stokes suspicions about gun control agendas.

“They are within their rights. We just want to know what they have to hide,” he said.

One spurned Vermonter said the group’s actions inadvertently illustrated the need for guns.

“I thought it was quite ironic that they called the police with guns to defend their meeting,” Blaire Scaglione from Warren said.