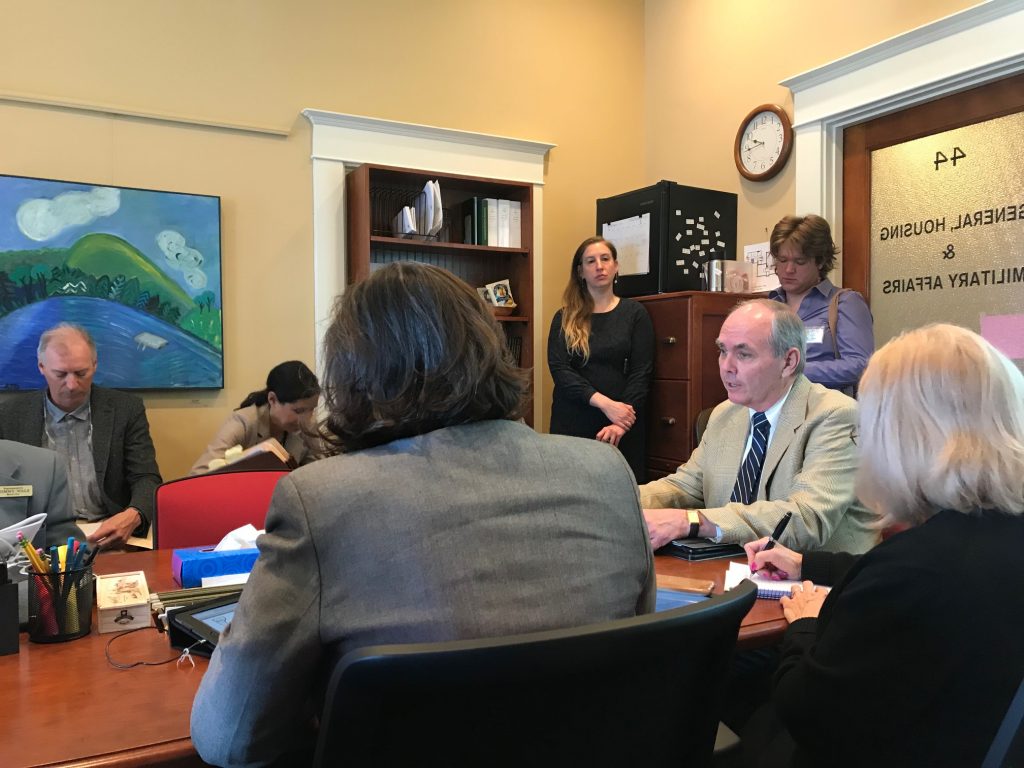 TOO COSTLY FOR BUSINESS:  William Moore, president and CEO of the Central Vermont Chamber of Commerce, tells the House Committee on General, Housing, and Military Affairs that his member businesses are not enthusiastic about a $15 minimum wage.

MONTPELIER — A handful of experts appeared at the House Committee on General, Housing, and Military Affairs on Wednesday morning to weigh in on the proposal to bump the minimum wage to $15 an hour.

William Moore, president and CEO of the Central Vermont Chamber of Commerce, has been one of the more outspoken critics of the $15 wage. His organization sends out surveys to member businesses, most of which have 10 or fewer employees. He said minimum wage is always a top priority for them.

“The minimum wage bill will very directly have an impact on them,” Moore said to the committee. “We are respectfully opposing the bill and asking you to reject it as totally unnecessary.”

With Vermont unemployment at just around 2.8 percent, the high demand for labor inflates the wages throughout the market automatically, without a state mandate.

“And the reason I say [a wage hike is] totally unnecessary is because the market is really driving wages. We firmly believe that the market should drive wages,” Moore said. “We’ve got members who cannot employ or find entry-level workers at the most basic types of jobs. For instance, janitorial services, mopping floors — they cannot find them at $21 an hour plus benefits. The market is driving wages, and that’s we feel that this bill is unnecessary.”

He reminded the lawmakers about a recent University of Washington study regarding Seattle, which has already enacted a $15 minimum wage. The study found that beyond $13 an hour, employers began to cut jobs and hours.

He also referenced a 2016 study by the Heritage Foundation that indicated what $15 an hour costs the company. A full-time employee must make the company at least $38,700 of value to be economically viable to the employer.

Sandy Paritz, project director for the Vermont Poverty Law Project for Vermont Legal Aid, suggested that a lot of the poverty challenges in Vermont stem from low wages. She supports a mandate of $15.

“When we look at the judiciary statistics for 2018, these kinds of cases make up the majority of case filings in the civil division. Foreclosures, collections, and landlord/tenant cases make up 68 percent of the civil court filings,” she said.

“In my 16 years in legal aid, it’s rare that I ever have a client that ends up in these terrible legal problems because they’ve mismanaged their finances or because they’ve done something terribly wrong. It’s really just the result that either they are disabled and their benefits are not enough to meet their most basic needs or they are working low wage or minimum wage jobs and their income just doesn’t cover their very basic needs.”

Paul Brown, co-owner of the Cold Hollow Cider Mill in Waterbury, testified about how a $15 minimum wage might affect his business. The company has more than 30 year-round employees, and 45 during peak season. He said 20 of them work full 40-hour weeks and earn between $12 and $18 an hour.

He said to bump everyone up to $15, and to offer proportional raises to those currently making more than that amount, would raise payroll overall by 28 percent. He said these workers are currently relatively well compensated considering benefits, which could become compromised were the minimum wage to be $15.

“We offer paid vacation, we have an IRA matching contribution plan, and we pay 75 percent of health insurance,” Brown said.

Daniel Barlow, public policy manager for the Vermont Businesses for Social Responsibility, told the committee why he thinks a $15 minimum wage is a good idea.

“Once they looked at their own hiring practices and their own wage timelines, a lot of them were gonna have a $15 an hour starting by 2024 anyways, that is the way the economy is moving,” he said.

He used the example of the ThreePenny Tap Room in Montpelier as a place that he’s spoken with, and apparently there is concern that going to $15 alone creates a competitive disadvantage when it comes to pricing products, so he alleges that some businesses actually prefer the $15 mandate to keep competition from undercutting prices.

This is the second year in a row that the minimum wage issue has dominated committee rooms, taking up vast amounts of time that could be given to other issues. Other testimony from experts likewise has suggested that a range of unintended negative consequences could emerge under a $15 minimum wage.