By Monica Burke | The Daily Signal

Earlier this month, a Virginia school board voted unanimously to fire a teacher after he refused to comply with administrators’ orders to use a female student’s preferred masculine pronouns. The student “transitioned” over the summer and began identifying as a man.

This latest casualty in the culture wars raises the obvious question: Who could be next? 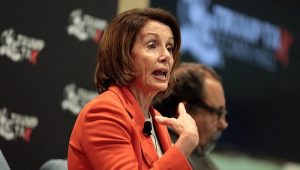 House Democratic Leader Nancy Pelosi recently announced that the Equality Act will be a top Democratic priority in 2019. The bill would impose controversial transgender policies on the nation by elevating “gender identity” to protected status in federal anti-discrimination law.

Peter Vlaming went to great lengths to accommodate the student without violating his Christian faith. He used the student’s new name to avoid upsetting the student, but refrained from using pronouns altogether in the student’s presence to avoid speaking against his belief that God created human beings male and female.

“I’m happy to avoid female pronouns not to offend because I’m not here to provoke,” Vlaming told the press, “but I can’t refer to a female as a male, and a male as a female in good conscience and faith.”

However, this was not enough to satisfy the student’s family or the board.

“I can’t think of a worse way to treat a child than what was happening,” said the principal, who had ordered the teacher to use the student’s preferred pronouns against his beliefs.

This incident does not bode well for future conflicts over transgender policies. As more of these conflicts arise in schools, hospitals, shelters, and businesses, America must allow its citizens to think about and debate these issues freely.

No one should fear losing their job because they believe that men and women are biological realities that are not interchangeable.

Unfortunately, government coercion as a weapon of the culture wars is now spreading across the professions.

First, there were cases in the wedding industry where the government tried to force people to violate their belief that marriage is between a man and a woman—florists, bakers, photographers, wedding venues, and so forth.

Then those lawsuits spread to even more industries—videography, web design, calligraphy studios, and public service.

Now, the government is beginning to penalize people who hold that there are two biological sexes. For example, a Catholic hospital was sued for refusing to remove a biological female’s healthy uterus to pursue gender transition. Meanwhile, two parents lost custody of their teenage daughter for refusing to allow their child to take testosterone and identify as a boy.

This could be just the beginning. House Democratic Leader Nancy Pelosi recently announced that the Equality Act will be a top Democratic priority in 2019. The bill would impose controversial transgender policies on the nation by elevating “gender identity” to protected status in federal anti-discrimination law.

This would have drastic implications for average Americans. It would open up sex-specific facilities like bathrooms, locker rooms, and shelters to members of the opposite biological sex. It would allow biological males to compete on women’s sports teams. It would force health care providers and insurance companies to provide and pay for radical transgender therapies.

In brief, stories like Vlaming’s would become the new normal.

This kind of sweeping, coercive policy is not the answer to current debates about gender identity. Americans must remain free to discuss these policies in a respectful manner—which is why the firing of Vlaming is so disturbing. Instead of allowing the parties involved to find a workable compromise, the school board not only picked sides, it silenced one side.

This is an extremely disturbing precedent.

Instead of pursuing a solution that would respect everyone—teacher and student alike—the school board refused to respect Vlaming’s beliefs and terminated him.

Speaking and acting according to one’s conscience should not be a fireable offense. When authorities try to force people to act against their beliefs, it is a blatant abuse of power—one that can easily backfire when political power changes hands. That is why everyone should be concerned about these emerging challenges to freedom of conscience.

Now that Vlaming has lost his job, who could be next? The honest answer is that someday, it may well be you.