Last week, the 8th U.S. Circuit Court of Appeals protected a Christian couple from having to choose between their business and their conscience. 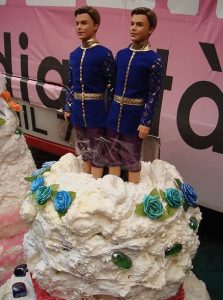 A federal appeals court has ruled for the first time that religious believers can invoke the First Amendment when declining to participate in same-sex weddings.

The plaintiffs, Carl and Angel Larsen, are videographers who create “commercials, short films, and live-event productions.” While they work with anyone of any race, sex, sexual orientation, or religion, they will not produce videos that advance viewpoints that violate their Christian beliefs. That includes videos that “contradict biblical truth; promote sexual immorality; support the destruction of unborn children; promote racism or racial division; incite violence; degrade women; or promote any conception of marriage other than as a lifelong institution between one man and one woman.”

The Larsens hoped to begin producing wedding videos, but Minnesota interpreted its human-rights act to require them to “produce both opposite-sex- and same-sex-wedding videos, or none at all.” They filed suit, claiming that Minnesota’s rule would compel them to speak in support of messages they oppose. The trial court ruled in favor of the state, but the 8th Circuit reversed.

It held that “The Larsens’ wedding videos are a form of speech that is entitled to First Amendment protection. …Even antidiscrimination laws, as critically important as they are, must yield to the Constitution. And as compelling as the interest in preventing discriminatory conduct may be, speech is treated differently under the First Amendment.”

It’s long overdue for courts to declare that people can’t be forced to take part in speech that they find morally repugnant.