By Elliott Raia and David Kreutzer | The Daily Signal

Although the Great Recession ended nearly eight years ago, wages have not taken off as in previous recoveries. The sluggish growth in wage rates has sparked calls at the federal, state, and local levels to raise minimum wages. 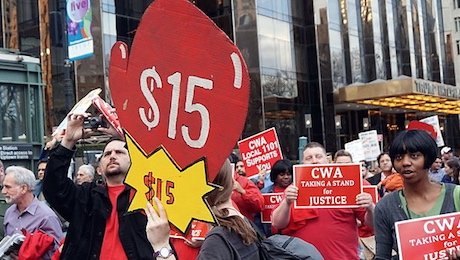 In Arizona, the $15 minimum is predicted to result in more than 200,000 lost jobs — almost all among the state’s lowest-skilled workers.

History now seems poised to repeat itself in Flagstaff, Arizona, where the new year ushered in an $11 per hour minimum wage. That’s $1 above the state minimum and $3.75 above the federal standard.

To coincide with the Jan. 1 increase, the Flagstaff Chamber of Commerce polled 200 local businesses of varying sizes and industries to gather information on what effect the increase would have. The results affirm mandatory wage hikes remain an ineffective and costly way to help the poor.

The poll responses show that even the seemingly minor $1 increase has significant ramifications. More than three-quarters (77 percent) of the companies expect it to have an effect on their businesses. More than half (53 percent) said it would force them to make undesirable adjustments, such as raising prices, decreasing work hours, or laying off employees, just to stay afloat.

Though the $11 minimum already seems to be taking its toll, significantly greater damage is on the horizon. Flagstaff’s minimum wage is slated to keep moving up until it hits $15.50 in 2022.

In Arizona, the $15 minimum is predicted to result in more than 200,000 lost jobs — almost all among the state’s lowest-skilled workers.

Raising the minimum wage also alters employment opportunities far into the future. It encourages industries that rely heavily on low-wage labor to seek more affordable technological upgrades, such as the self-serve kiosks now seen in many fast food restaurants.

Some of these jobs would be lost to new technology in any event. But a forced wage bump accelerates the switch. In other cases, businesses simply go with fewer workers. Unless remaining workers boost their productivity, those businesses will deliver worse service and less output—a recipe for slowly going out of business.

In addition to job losses, minimum wages can increase economic inequality. Higher-skilled (and higher paid) workers already are compensated above the minimum and are less likely to be affected by downsizing.

Supporters of minimum wage increases often point to the struggle of those supporting a family. But more than half of minimum wage workers are between 16 and 24. Of this group, 79 percent work part time and live in households where the family income averages $65,000.

In many cases, an increase in the minimum wage winds up helping teenagers and college students working part time far more than single moms trying to support families on their own.

This is why minimum wage hikes are such an inefficient way to alleviate poverty.

Higher minimum wages also tend to eliminate entry-level jobs. Though not glamorous, low-wage jobs allow inexperienced workers to develop skills and establish a work history that allows them to move on to higher-paying jobs.

However, as minimum wages rise and jobs are eliminated from the marketplace, those who aspire to better their lives are robbed of opportunities for critical experience to develop job skills and prove themselves worthy of promotion.

Minimum wage increases are the product of good intentions, but destroying job prospects is no way to help the poor.

Rather than seek harmful mandates that put barriers on the road out of poverty, communities should unshackle job creators. Doing so will afford businesses and individuals alike the opportunity to improve their prospects and prosper.