As the home of SolarFest for two decades, Middletown Springs had been a hot spot where renewable energy enthusiasts came to celebrate the latest solar technology and revel in environmentalist culture. Then came along groSolar and the Orchard Road Solar Project. 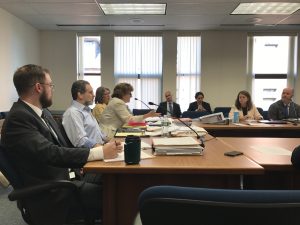 BAD FOR PROPERTY VALUES?: Lawyers tangle over whether solar projects bring down property values at a technical hearing for the Orchard Road Solar Project.

Over 100 town residents have signed a petition against the 500-kilowatt net-metered project that would cover almost 5 acres of an old apple orchard on a north-facing slope.

At the meeting, attorney L. Brooke Dingledine, representing the residents, sparred with attorney Geoff Hand, counsel for groSolor. Also speaking at the marathon hours-long sessions were the residents themselves, along with representatives of groSolar.

The crux of the dispute on Monday centered around negative aesthetic effects the panels would have on the surrounding homes. The panels would face south on the north side of a local mountain, meaning neighbors would see the brackets underneath the panels rather than the smooth surface on top.

Moreover, Dingledine questioned if groSolar or the landowner had considered other, less visually intrusive locations. Dingledine was engaging in an important “Quechee Analysis,” a tactic used to evaluate aesthetic impacts in dozens of energy siting cases.

“It comes out of Act 250 and is a standard test developed in the 1980s to make the aesthetics evaluation more objective and less subjective,” Annette Smith, director of Vermonters for a Clean Environment, told True North. “And part of that test is the consideration of alternative sites, and so the argument from the neighbors is that they didn’t consider this alternative site.”

Rod Viens, executive vice president of operations for groSolar, said the company ruled out another portion of the same farmland — a spot neighbors say is hidden and preferable — because it was thought to be a Class II wetland.

However, Viens offered no documentation that it’s a wetland, a point of contention between groSolar and frustrated residents.

“A delineation can be as simple as myself or a project developer with him (an Agency of Natural Resources representative),” Viens said. “We walk a site and we say, ‘Well here’s the water — this is where we think it is.’ We’d say, ‘Can you get me a diagram of what the shape of that wetland would be?'”

No ANR representatives were at the hearing to explain why the location should be considered a wetland. Moreover, Dingledine presented photographs which depict the site as a dry pasture with horses grazing the land. She questioned the thoroughness of groSolar’s assessment.

“We heard from his (Viens’) testimony that he goes to places all the time and they kind of do a drive-by and look at it like, ‘Oh gosh, that’s a wetland.’ (That’s) without any evidence presented in terms of what were hydric soils, what were the hydric plants, where was the water table — those are the three pieces of information that experts use to determine whether or not there’s a wetland.”

Dingledine attempted to submit as evidence at least two cases where the Public Utility Commission issued a certificate of public good to solar projects in other Class II wetlands around the state, but Fabrizio denied the submissions.

“I’m interested myself in terms of what relevance they have and how we’re going to use them,” Fabrizio said.

Dingledine responded that they set precedent. “It is an indication that, in fact, not all situations result in a Class II wetland being prohibitive in terms of obtaining a permit to site a solar project,” she said.

Viens also said that groSolar has done projects in Class II wetlands before, but he added the standards have tightened, and so now it’s more difficult to get projects approved in wetlands.

“So, in other words, because there’s no literature or nationwide information that you have that solar projects diminish the value of properties surrounding it, you didn’t consider it?” she asked Veins.

Veins said the company had not.

“We haven’t seen … a report or analysis that indicates solar projects affect property value,” he said. “It really is subjective, as well. Some people would love to live next to a project like this because they are quiet.”

Aileen Stevenson, a Middletown Springs resident and retired realtor, testified that the view from a property is a key determining factor in a town’s appraisal and the fair market value of a home.

“In either case, whether it’s a town assessment or a market valuation for sale, or for tax purposes or whatever, however they view a property that has something marring its view is going to be given a lower price,” she said. “I think everybody in the room should understand that.”

Smith said the whole process has been poorly executed.

“They are being allowed to write off what everyone from the neighborhood thinks would be an acceptable alternative based on no evidence in the record, except an email,” she said. ” … This process at the PUC is inefficient, infuriating, and a really poor way to make decisions about land use siting for renewable energy.”

A 100-page document put together by local residents details a litany of concerns, some of which the commission has refused to consider. One example is possible contamination of the soil with lead arsenate from the old apple orchard.

The document claims the site stands to “release toxic chemicals” into surface water and groundwater, among other environmental concerns.