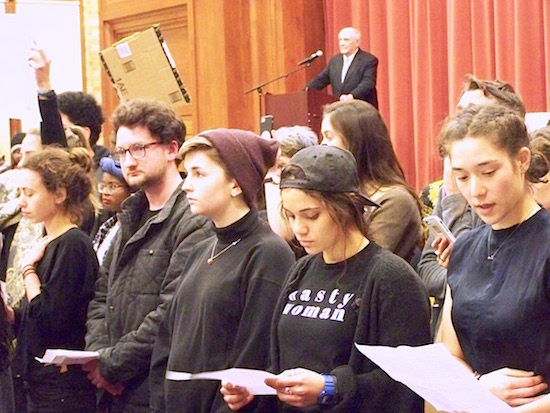 The event, which included several dark-masked, bandit-like student protestors, descended quickly into a rowdy effort to prevent the Harvard- and MIT-educated speaker from discussing his book, Coming Apart. The student protest effort succeeded.

Murray is affiliated with the American Enterprise Institute, a conservative think tank in Washington, D.C. He also is the co-author of the 1994 book The Bell Curve, an study of race and intelligence.

On campus, Murray’s appearance was being cast as a display of academic free speech versus shutting down what protesting students called hate speech.

Before Murray appeared on stage, William Burger, the college’s vice president of communications, told students about the college’s rules of conduct for First Amendment protests. He noted that failing to follow the rules could result in reprimands including academic dismissal.

Middlebury College President Laurie Patton offered her reasons for allowing the free and open discussion by a researcher she did not personally agree with. “I would regret it terribly if my presence here is read to be something that it is not — an endorsement of Mr. Murray’s research and writings,” she said.

The loud, sustained protest inside the auditorium included many students turning their backs on Murray when he walked on stage.

With their backs to Murray, students held up posters with hand-scrawled protest slogans such as “White Supremacy is the Enemy” and  “Race is a Construct” and “F— Eugenics.”

Many in the Middlebury audience shouted, “Racist, sexist, anti-gay, Charles Murray go away!” in unison. One protestor in the audience shouted “Yiannopoulos!” referring to former Breitbart News commentator Milo Yiannopoulos, and perhaps the violent University of California, Berkeley protest against him in February.

Chanting continued for nearly 30 minutes until Murray was escorted off stage by Allison Stanger, professor of international politics and economics at the college. A security guard and student members of the American Enterprise Institute — a student-run campus club which arranged the author’s appearance — also escorted Murray.

When Stanger returned on stage and took the podium microphone, she said, “We’ll have a great dialog if you’d let us continue, but you’re not going to let us speak. Brothers and sisters, namaste.”

Murray was ushered to an undisclosed room on campus to deliver his lecture via live stream video. However, when a large video projection screen was lowered for audience viewing and the live streaming began, loud protesting continued, making it impossible for audience members to hear Murray and moderator Stanger.

Most people know Murray for The Bell Curve. But the speaker was invited to Middlebury to discuss Coming Apart, a more recent book about the moral decline of white America and the growing economic divide.

“I wanted to see a different perspective,” she said. “Charles Murray does not have the credentials, but he does influence a lot of people in our nation. I disagree with his ideas but I feel like I should know about his ideas to challenge me intellectually.”

Anna May Walker, a sophomore English major, was appalled by the behavior of fellow students.

“Silencing Charles Murray is another example of two wrongs not making a right. Let him speak and engage intellectually,” she said. “Sure, I would have preferred him not to have been invited to campus, but he’s here and now we’re guilty. … We’re people unwilling to hear the voices of others despite demanding our own voices be heard.”

Walker said she fears that students who stand for free speech at the college will face intimidation and retribution.

“I know in saying these words I jeopardize myself in many ways. I will face the wrath of this community that we clearly see here today. It frightens me. This? This was not the answer,” she said.

“The real world beyond this campus can’t be controlled and shut down with shouted sentences. … If Murray’s ideas aren’t legitimate, then we should prove it by discussion, not shouting. We are undermining the authenticity of this institution with this whole process.”

Stanger reportedly was violently assaulted during the event and was treated at nearby Porter Hospital. Fire alarms were set off and several campus electronic devices were disrupted. Burger said some students identified by staff members will be punished for interrupting the event.