Salmen Hernandez-Ayala, 48, was apprehended by U.S. Border Patrol agents in Derby on May 17, 2018, and has been in holding since his arrest.

According to court records, Hernandez-Ayala traveled by taxi from New York City to a location near the U.S./Canadian border where he picked up three illegal aliens and began traveling southbound away from the northern border. 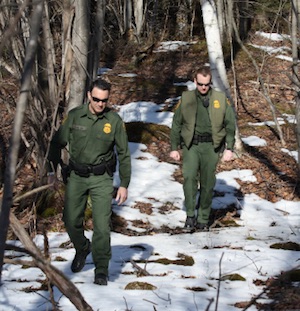 The Swanton Sector Border Patrol is responsible for securing the land border between ports of
entry in Vermont as well as New Hampshire and northeastern New York.

Border Patrol agents stopped the taxi around 3 a.m. on U.S. Route 5 in Derby, where it was determined that Hernandez-Ayala and the three aliens were in the country without permission.

Gamez-Saban, 21, of Guatemala, was charged with illegal reentry into the U.S., a felony offense, after he was deported from the U.S. once already. He pleaded guilty on June 7, 2018, and was sentenced to time served by U.S. District Judge Christina Reiss.

Campos-Navarro, 21, of Mexico, was charged with a misdemeanor for illegal entry into the U.S. He pleaded guilty on June 28, 2018, and was sentenced by U.S. Magistrate Judge John M. Conroy to time served.

Cruz-Salvador, 20, also of Mexico, was charged with a misdemeanor offense for illegal entry into the states. He pleaded guilty on June 28, 2018, and was sentenced to time served.

Brad Brant, special operations supervisor of the Swanton Sector of the U.S. Border Patrol, said illegal alien smuggling at the northern border is not a new phenomenon, but it’s recently become more of a prominent occurrence.

“The sector sees a lot of illegal activity because we’re located between the metropolitan centers of Montreal (Quebec) and Toronto (Ontario), and Boston and New York,” Brant said. “So that kind of funnels the traffic into the Swanton Sector.”

But Brant said the sector has seen a lot more activity on the Derby Line area of the border where Hernandez-Ayala and three illegal aliens were apprehended in May.

“The Derby Line area is unique because the town of Derby and the town of Stanstead (Quebec) grew together,” Brant said. “Many places in the town — the border goes through people’s houses, it goes down the middle of the streets, and it’s located right by the interstate.”

He said the close proximity of the interstate makes it easier for alien smugglers to cross the border quickly, hop on the interstate and make their way south before being detected.

In the case of Gamez-Saban, who was deported from the country before and made his way back in again, Brant said there is really nothing Border Patrol agents can do to prevent additional attempts to enter.

“This person was at one time found in the U.S. illegally, returned to Guatemala, apparently traveled to Canada and reentered the U.S. through Derby Line,” Brant said. “We can’t control it, and Canada will not refuse your entry if you get deported from the U.S.”

On Memorial Day weekend in Woodstock, New Hampshire, a Customs and Border Patrol checkpoint was set up on Interstate 93 where CBP agents assigned to the Swanton Sector of the border apprehended 17 illegal immigrants in just one day.

While having similar Border Patrol checkpoints in Vermont could mean more apprehensions of illegal aliens, Brant said, Vermont hasn’t conducted one in a while.

He added that they normally result in the apprehension of about one or two illegal aliens crossing from Canada, but logistically it’s a challenge for agents to conduct them.

“Running a checkpoint is a pretty heavy load for us,” he said. “The sector has 295 miles of border — 92 of that’s water — and we have approximately 300 agents patrolling.”

In June 2018, Sen. Patrick Leahy, D-Vt., introduced a bill that would put limitations on where Border Patrol agents can conduct immigration checkpoints.

Currently, Border Patrol officials are able to conduct checkpoints within 100-miles of the border, but Leahy’s bill, The Border Zone Reasonableness Restoration Act of 2018, would cut that distance to a mere 25 miles from the border.

“The Trump administration’s aggressive yet wasteful use of immigration enforcement resources has subjected law-abiding citizens to needless and intrusive searches at Customs and Border Protection (CBP) checkpoints far from the border,” Leahy said in a statement.

Leahy said if the bill is enacted, it will “establish critical privacy protections for Americans by limiting the unjustifiably wide ‘border zone’” where Department of Homeland Security officers may stop and search vehicles or private land without a warrant for the purpose of patrolling the border.

Images courtesy of U.S. Customs and Border Protection and U.S. Department of Justice