Liberals in Congress are promising Americans that their “Medicare for All” proposals for government-controlled health care will expand access to care.

As Sen. Cory Booker, D-N.J., explains, “Obamacare was a first step in advancing this country, but I won’t rest until every American has a basic security that comes with having access to affordable health care.”

Likewise, Sen. Kamala Harris, the California Democrat, predicts, “Well, the idea is that everyone gets access to medical care. And you don’t have to go through the process of going through an insurance company, having them give you approval, going through the paperwork, all of the delay that may require.” 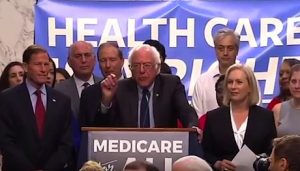 In their “Medicare for All” bills, congressional liberals would outlaw virtually all private health insurance, including job-based health coverage. In short, they would deny the right to enroll in any alternative to the government plan.

Though it sounds too good to be true, a plurality of Americans, according to the National Opinion Research Center, actually think it is. It reports that 42 percent of respondents in a national survey believe that “Medicare for All” would increase access to doctors and hospitals, while only 24 percent expect such a program would reduce access.

This faith is misplaced. Britain and Canada provide their citizens with single-payer national health insurance, and the evidence is overwhelming: Access to government health insurance does not automatically translate into access to medical care, let alone the avoidance of frustrating and sometimes dangerous delays in medical treatment.

Consider the problem of delays. In the British National Health Service—the grand-daddy of “single payer” health care—there are more than 4 million people awaiting hospitalization. To their credit, the British media has not been shy about reporting the shabby conditions in overcrowded and understaffed British hospitals, the denials or cancellations of surgeries, and the suffering of British patients.

For those British citizens who want to avoid care delays or denials by the National Health Service, there is the option of enrolling in British private health insurance. Such an option is especially desirable for British patients in need of highly specialized medical procedures, such as a coronary bypass or orthopedic surgeries.

In the United States, congressional liberals—in the text of their leading “Medicare for All” bills (H.R. 676 and S. 1804)—would outlaw virtually all private health insurance, including job-based health coverage. In short, they would deny every American the right to enroll in any alternative to the government plan.

American health care deficiencies are indeed serious—quality is uneven and noncompetitive markets drive up costs and undercut the affordability of care and coverage. On measures of access to care, however, researchers writing for the Journal of the American Medical Association—examining the comparative performance of 11 “high-income” nations—found that “the United States generally performed better than other countries.”

Concerning access to specialized care, for example, they found that only 6 percent of American patients reported waiting more than two months to see a medical specialist, compared to 39 percent of Canadian patients and 19 percent of British patients. The Fraser Institute, a prominent Canadian think tank, estimated that in 2018 the median waiting time for a Canadian patient to see a medical specialist on referral from a general practitioner was 19.8 weeks.

Access to high-quality care is also dependent on the availability of medical goods, as well as specialized services, including advanced medical technology. The Journal of the American Medical Association researchers found that the U.S. ranks first in the utilization of computed tomography units, and second in the number of magnetic resonance imaging (MRI) machines per million of the population (38.1), while  Canada has only 8.9 MRIs per million and Britain has just 7.2

Likewise, in fighting breast cancer, the United States deploys 43.3 mammography units per million of the population, while Britain has just 21 and Canada has only 17.3.

Not surprisingly, the researchers found that screening for the prevention of breast cancer is higher in the United States than for all other high-income countries.

Americans can also celebrate stellar progress in reducing death from heart disease. In a major study for the National Bureau of Economic Research, another team of researchers report that between 1950 and 2015, mortality from cardiovascular disease declined by a stunning 73 percent.

On the provision of coronary angioplasty, the United States operates at a rate of  248 per 100,000 of the population, compared to Canada with just 157 and Britain at only 128. The United States also has a much better record of reduced mortality after incidents of stroke and heart attacks than most other advanced countries.

Access and quality problems in government-controlled health care are not far from home. Just ponder the scandalous delays and denials of care at the “single payer” Veterans Administration, Obamacare’s notoriously narrow provider networks, and the historically poor record of patient access to doctors, quality care, and medical outcomes in the Medicaid program.

A National Opinion Research Center survey reports that most Americans are “somewhat” or “very” concerned about their access to doctors and hospitals. Not surprisingly, therefore, the Kaiser Family Foundation reports that 70 percent of Americans would oppose “Medicare for All” if it would “lead to delays in people getting some medical tests and treatments.”

Experience is the best teacher. The lesson: Liberal promises do not match “single payer” performance. Looking at the record, ordinary Americans can know the truth.