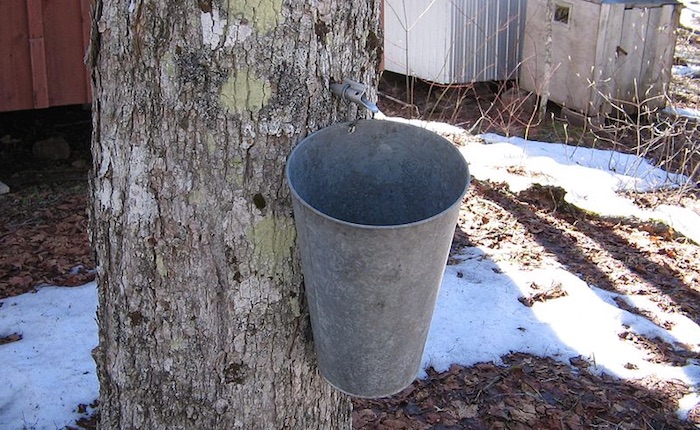 MAPLE SYRUP: The Michigan study found that sugar maple output in the region was actually being enhanced by nitrogen emissions from human sources, like cars, power plants and factories. Nitrogen promoted maple growth, despite a slight rise in regional temperature.

NPR is reviving a month-old study warming could lead to the “demise” of sugar maple trees, and thus maple syrup, if nothing is done to curb greenhouse gas emissions.

The University of Michigan study that NPR cited examined more than 1,000 trees in special federally-funded test sites set up to see how human nitrogen emissions affects maple tree growth. Researchers then extrapolated that data to about 80 years under different global warming scenarios.

“The biggest trees will still be there, but won’t be growing as much and the little saplings won’t survive, [so] once the older trees start dying, there will be no new trees to replace them,” University of Michigan ecologist Inés Ibáñez told NPR.

NPR isn’t the first to warn about the “demise” of maple syrup. Media outlets reported on the University of Michigan study when it was published in January. Science magazine ran a similar story suggesting warming could “bring an end to sugar maples.”

NPR ended the article telling readers that “stocking up on maple syrup now will protect against dry pancakes in the future.”

So, should we really be worried about losing maple syrup? Probably not.

The Michigan study found that sugar maple output in the region was actually being enhanced by nitrogen emissions from human sources, like cars, power plants and factories. Nitrogen promoted maple growth, despite a slight rise in regional temperature.

In fact, sugar maple output and yield has increased, despite global and regional rising temperatures.

Based on this, Ibáñez and her colleagues found that sugar maple trees would only be “slightly harmed” under a scenario of moderate warming — 1.3 degrees Fahrenheit by 2100.

It was only under the “extreme” scenario that nitrogen fertilization was unable to offset negative effects of warming. That scenario had temperatures rise about 10 degrees Fahrenheit by the end of the century, according to the study’s release.

It’s under the extreme scenario that “sugar maples would eventually disappear from Michigan’s Lower Peninsula, though the changes would likely occur over several centuries,” reads the release.

The Michigan study’s “extreme” warming scenario is consistent with predictions under the Intergovernmental Panel on Climate Change’s RCP 8.5 scenario, which accounts for skyrocketing emissions from energy combustion.

But experts are increasingly calling the RCP 8.5 “scenario” unrealistic. A study pointed out in December that RCP 8.5 models a future where historical trends reverse, and the world switches to using more coal.

This “indicates RCP8.5 and other ‘business-as-usual scenarios’ consistent with high CO2 forcing from vast future coal combustion are exceptionally unlikely,” the study found.