First a climate mob interrupted the workings of the Vermont House. Then another bunch of climate protesters stopped the Strolling of the Heifers Parade in Brattleboro. Last week they struck again — not the same individuals, but the same climate-intoxicated friends of civil disobedience. They won’t be satisfied until, well what? The climate stops changing? 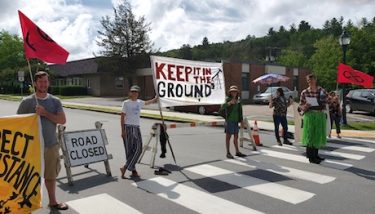 This last protest took place all morning long last Tuesday, on an intersection on State Street in downtown Montpelier. The “Extinction Rebellion” climate change mob stopped traffic all along State Street. This mob demanded “immediate, overwhelming government response to the climate emergency”… saying “we do not trust our government … we demand a Citizen’s Assembly to oversee the changes as we rise from the wreckage, creating a democracy fit for purpose.”

Eyewitness Guy Page, who publishes State House Headliner report, observed that the protest got the attention of both Montpelier and Vermont State police, all of whom told him that the protesters were in violation of their permit because they were blocking traffic. There were, of course, no arrests.

Maybe it’s time for ordinary Vermonters to make demands. Try this: “We demand that climate change civil disobedience protesters be arrested, booked, put before a judge, and if convicted, sent off to a rustic camp up in Essex County without their cell phones to plant carbon dioxide-sucking trees for a week or two.”

That sounds reasonable, but it won’t happen, because weak-kneed prosecutors will let them off.