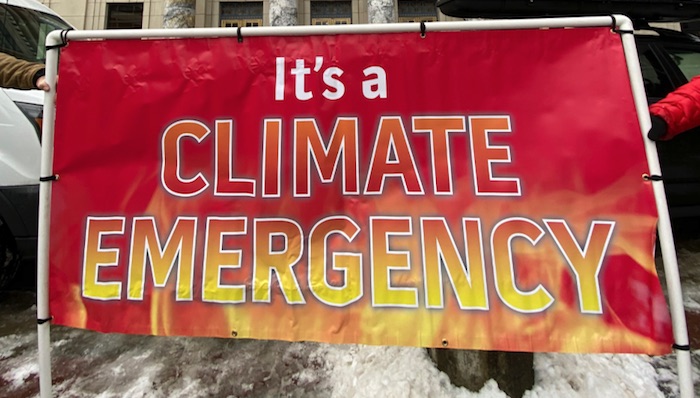 President Biden, urged on by Sen. Bernie Sanders, is reported to be fashioning a declaration of a “national climate emergency” that he hopes will authorize him to do whatever he thinks is needed to be done to fend off a climate Armageddon. The Supreme Court will probably not be persuaded that such a desperate use of unaccountable executive power is constitutional.

In its final week in session, the U.S. Supreme Court handed down four opinions that brought the wrath of the left down upon the six justices in the majority. One expanded parental choice in education to sectarian schools, one ended New York’s arbitrary regulation on carrying firearms for self-defense, and one held that there is no constitutional right to abortion.

The fourth one drew hostile fire from the anti-climate change movement: West Virginia v. EPA. Among the Vermont complainers was Roxanne Vaught, executive director of Vermonters Businesses for Social Responsibility. Wrote she, the Court “limited the EPA’s ability to reduce climate pollution from power plants, severely damaging our ability to tackle our escalating climate crisis.”

Yes, the case dealt with Environmental Protection Agency regulation of power plants, but that only happened to be the controversy that brought into focus a much broader issue: what authority do the regulatory agencies have to order people to do what the regulators want, or be punished? The answer is the authority of the Constitution, and laws duly enacted by Congress pursuant to the Constitution.

Few disagree with that. The great difference of opinion comes when Congress passes a sweeping but vague law and the regulators eagerly fill in the details. At what point should the regulators be made to say, “whoa! The authority Congress gave us doesn’t go that far.”

Faced with numerous cases of regulatory overreach, the Supreme Court in 1984 established the Chevron doctrine. It required the Court to defer to the presumably expert regulators who could produce a “reasonable” interpretation of ambiguous laws. This lightened the Court’s case load, but destroyed political accountability for actions by regulators at agencies such as EPA, OSHA, SEC, FTC, and CDC.

The West Virginia case originated with President Obama’s failure to get Congress to enact his Clean Power Plan. With the pressing need to be hailed as the global champion of the war against “climate change”, and a battle cry of “We Can’t Wait!”, Obama decreed rules that in effect directed all power plants to switch from coal and natural gas fuel to generation provided by renewables. After a tortuous trip through the courts involving three Presidents, the issue of whether EPA had sufficient Congressional authority to decree such a “generational transformation” came before a Court unsympathetic to a runaway regulatory bureaucracy.

The government admitted that the required transformation would “impose billions in compliance costs, raise retail electricity prices, require the retirement of dozens of coal plants and eliminate tens of thousands of jobs”. The Court, rightly, deemed the CPP to be a “major question.” As such, it had to be founded on “clear Congressional authorization for the authority [the EPA] claims.”

In plain English, if Congress decides that such a program should be carried out, Congress has to make its authorization explicit and clear. Members of Congress and the President who signs the bill have to go on the record, and face the consequences from the citizenry.

That accountability is not a popular concept on Capitol Hill, or for that matter in Montpelier, where the Vermont Climate Council promotes sweeping regulation by agency bureaucrats, that no legislator will ever have to vote on.

Example: the Clean Heat Standard, cleverly designed to pay for millions of dollars worth of favored energy improvements (weatherization, heat pumps etc.) with money taken from heating fuel consumers, built into the higher price of that product.

Liberal Justice Elena Kagan delivered a dissent based on the horrors of climate change; “modern science is unequivocal”, rising oceans swamping coastlines, 4.6 million extra heat deaths per year etc. She argued for immediate regulatory action no matter what the cost, and that down in the bowels of Sec. 111 of the Clean Air Act some rationale can be found to support the Clean Power Plan, with no further action by Congress. Not persuasive.

President Biden, urged on by Sen. Bernie Sanders, is reported to be fashioning a declaration of a “national climate emergency,” that he hopes will authorize him to do whatever he thinks is needed to be done to fend off a climate Armageddon. The Supreme Court will probably not be persuaded that such a desperate use of unaccountable executive power is constitutional.

David Rifkin, counsel for the 27 states and plaintiff industries in the case, said following the Court’s opinion, “The power of the administrative state is certain to recede, bolstering democratic accountability, economic growth, and liberty.” That should be a happy outcome for anyone defending democracy and the rule of law.

9 thoughts on “McClaughry: EPA case a victory for the rule of law — will Biden now declare a ‘climate emergency’?”