Editor’s note: This commentary is by Matt Krauss, of Stowe. He is a retired state employee and former state legislator.

Vermont women were denied membership in the exclusive and private Ethan Allen Club until 1990. The welcomed change came about because of very intense public pressure. Women remember the sting of exclusion, and Vermonters have rightfully rejected joining these private, very restrictive clubs. 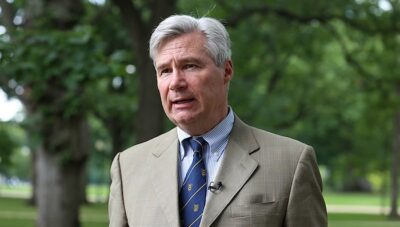 Not all private clubs in New England are so progressive. Bailey’s Beach Club in Rhode Island is in the news regarding its disputed minority membership numbers. Newsweek magazine called the club “the pinnacle of WASP elitism” and an “elite all-white beach club.” Local reporters have criticized its lack of diversity while the club manager disputes those comments. The preeminent attendee, and past member, is Sen. Sheldon Whitehouse, D-R.I. He is the scion of a famous Rhode Island family and graduate of private preparatory schools and Yale.

When asked about this club he said they represent “a long tradition in Rhode Island and there are many of them, and I think we just need to work our way through the issues.” Perhaps he could work through the issues directly with his wife Sandra, a club member for decades and one of the largest shareholders of Bailey’s Beach Club. Vermonters might see this situation producing some necessary, but awkward pillow talk. “Say honey, how’s the minority membership drive coming at the club?” National Review said recently that Sen. Whitehouse may belong to or attend as many as three private and exclusive Rhode Island clubs.

Given some of the facts are disputed, let’s agree that at the very least, an in-depth and impartial investigation by a reputable legal firm should be initiated. Exactly what is the composition of the club’s membership? How are minority memberships sought and handled? What data over the years is available and verified? Are all local, state and federal laws being followed? And finally, in fairness to Sen. Whitehouse, we should allow him to describe his family’s relationship to these clubs. Every individual should be afforded the presumption of innocence.

Sen. Patrick Leahy, D-Vt., chairs the Senate Judiciary Committee and has Whitehouse as a committee member. Leahy is of Irish ancestry. He knows the discrimination the Irish suffered in employment, private club membership and elite college admission. Should Vermonters be hearing from him regarding his opinion and the actions he might undertake to address this situation? Vermonters might remind Sen. Leahy that the real White House was partially constructed by black slaves. The private clubs that Sen. Whitehouse frequents apparently aren’t eager to admit many of those ancestors as club members.

Sen. Bernie Sanders, I-Vt., chairs the Senate Committee on the Budget and also has Sen. Whitehouse as a committee member. Sanders is of Jewish ancestry. He rightfully speaks of the need to ensure diverse voices are heard in all arenas. Senator Sanders can recount the historical discrimination Jewish people faced in America. In 1988 Sanders went to the Soviet Union on a 10-day honeymoon. I’ll wager he had an easier time getting into the Soviet Union in 1988 than he would have had getting into the tony Bailey’s Beach Club. Should Vermonters know his opinion too?

Vermont women like Lt. Gov. Molly Gray, state Sen. Becca Balint, House Speaker Jill Krowinski and Mary Powell are anxiously awaiting the opportunity to seek a federal office. They are courageous, ready to face challenging issues and would bring different perspectives to the office. Here is an opportunity for them to draw a distinction regarding how women would handle apparent discrimination and exclusion differently. Are they prepared to be as courageous as former Vermonter and Nobel winner Aleksandr Solzhenitsyn? He was a tireless, fearless and eloquent critic for truth no matter how ugly or inconvenient.

Have Vermont media met their responsibility to demand an appropriate response and action? Have we heard their voices in this matter?