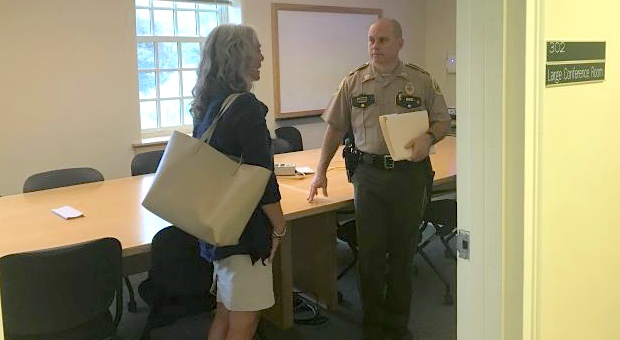 WATERBURY, Vt. — At the first marijuana commission meeting held to find a path to recreational pot smoking in Vermont, lawmakers and police appeared divided on whether legalization is inevitable.

In May, Gov. Phil Scott vetoed a bill that would have let an estimated 80,000 pot smokers possess an ounce of marijuana and grow two mature pot plants. At the time, he said he might approve legalization if lawmakers addressed public safety and health issues and protected youth.

Thursday’s meeting was led by former Vermont Democratic Party Chairman Jake Perkinson, the appointed chair, and former state Rep. Tom Little of Shelburne, the vice chair. In keeping with the governor’s guidelines, Little emphasized that protecting roadway safety would be a key priority.

“We recommend appropriate measures for roadway safety and also [aim] to pursue a regional impairment threshold for the New England states, and in-parity road safety laws and penalties,” he said.

“There are concerns that legalization may cause some very unsafe conditions on the road, and those are existing now as well,” said John Campbell, executive director of the Department of State’s Attorneys and Sheriffs. “People are driving impaired, whether it be from alcohol or from drugs, and marijuana is included in that.”

Campbell, a Democrat and former Senate president pro tempore, said there is “clear intent” that the Legislature is moving towards legalization.

But Colchester Police Chief Jennifer Morrison, the first female president of the Vermont Association of Chiefs of Police, took a different view. She warned that legalization is not a foregone conclusion.

“I want to say right out of the gate that I bristled at the tone of the larger group meeting that this is a [predetermined outcome], that there will be legalization regardless of the work of these subcommittees,” she said.

“Maybe I’m just seeing this from a different side, but I think that you can’t make that decision until the work is done and see if there is a responsible path forward.”

Rutland EMT Bill Mapes said he’s concerned about trends in other states, such as the relationship between marijuana and alcohol use in Colorado, where pot smoking is legal.

“They anticipated alcohol sales falling off as they legalized marijuana, and what actually happened was their alcohol sales went up,” he said. “And they actually had an increase in alcohol-related crashes.”

“We’ve got 48 fatalities in Vermont, I believe, as of this morning,” he said. “Twenty of those have either alcohol only, drugs only, or a combination of alcohol and drugs. So, if nothing else, this is an urgent issue, I think, when it comes to highway safety that we have to address.”

Currently, there is no way to test if a driver is impaired from marijuana. As a result, states must hire drug recognition experts, or DREs, who have specialized drug training. Critics say DRE methods aren’t effective at verifying drugged driving.

Vermont State Police Lt. John Flannigan, a certified DRE, gave an example of something he looks for during stops.

“Eyes are the window the soul,” he said. “There are certain drugs that cause what we call gaze nystagmus. Certain drugs can constrict the pupils, like narcotics and opiates, and certain drugs can dilate our pupils and cause bloodshot or watery eyes. … There’s a disruption in the central nervous system for which there are outward signs.”

Capt. Mike Major, of the Vermont Police Association, describes DRE training as akin to a medical professional who diagnoses patients based on observation of symptoms.

“You’ve got to know the drugs and the effects,” he said. “You actually go out west and spend a few days dealing with one of the local lockups, and [you are] actually physically watching and working with people that are under the influence to look at the effects.”

Morrison noted that the additional training certification is “a tremendous burden” that lawmakers have to overcome in any path toward legalization.

“I’m here to represent the league’s interest in measuring the burden of any path forward that we create,” she said.

The commission’s first deadline is Nov. 15, when commissioners will report on injuries, death, crime rates, and abuse of marijuana and other substances in relation to roadway safety. Public Safety Commissioner Tom Anderson, who chairs the subcommittee, said it would be important to scrutinize the existing literature.

“There are a ton of reports out there on this stuff. The trick is finding the ones where the methodology looks good, the data looks good, a report that we can have some confidence in,” he said.

Sen. Joe Benning, R-Caledonia, told the committee that this work needs to be done with or without legalization.

“It is obvious from the Rand report that we have a very substantial population in this state that is currently [using], and for us to pretend that this is not happening means that we are not devoting resources and energy into dealing with the problems that we currently have, and will continue to have, should we legalize or not.”