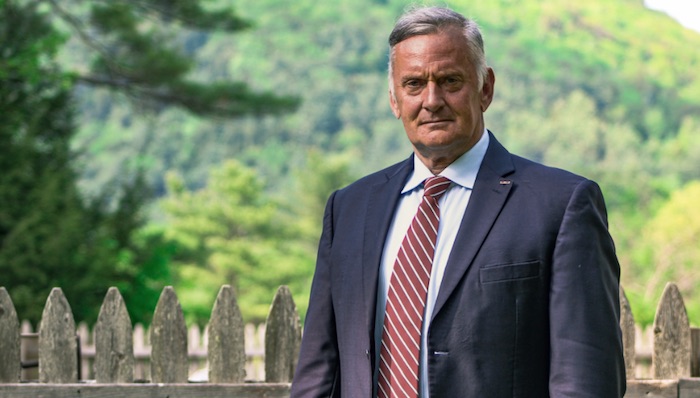 According to the UNH survey, 30% of likely Republican primary voters would choose Malloy while 24% would vote for Nolan. Another 3% would vote for investment banker Myers Mermel. However, 42% of those surveyed said they are undecided.

The race will be decided in the upcoming Aug. 9 primary election.

On Friday, during an online debate hosted by VTDigger, both Malloy and Mermel touted traditional conservative values and shared their significant backgrounds in business.

Malloy has 42 years of professional experience, including 20 years serving in the U.S. Military. He is a West Point graduate and a combat veteran. He also has a master’s degree in business administration and a graduate certificate from Georgetown University.

Malloy said his work in Washington, D.C., over the past decade would help him be a leader in the U.S. Senate.

“I’ve worked with our 20 NATO partners and allies and also worked in 20 different presidential disaster declarations,” he said. “For the last 11 years-plus I’ve been in business development positions, mostly in the Washington, D.C., area providing services to mostly the U.S. government.

Malloy called for the nation to strive for independence in energy, technology and agriculture.

He added that in the last 19 months he’s seen “unconstitutional mandates and initiatives and executive orders.”

“If I were to take this position as U.S. senator, I would instill some discipline back to the oath [of office],” Malloy said. “I want to go back to actually Congress making laws, not OSHA or the EPA or Dr. Fauci. Congress makes the laws.”

Mermel also boasts strong experience and convictions. In addition to his 35 years of business experience, he was a White House intern under George W. Bush and also worked on GOP presidential candidate Mike Huckabee’s campaign in 2012. Huckabee has since endorsed Mermel.

“I’m a conservative, I’m fighting to be the voice of low and moderate-income Vermonters who’ve been penalized by economic policies from the left,” Mermel said. “And my particular expertise that I bring to bear at the Senate level is 35 years of business experience. This business experience will allow me to combat the biggest issues that are facing Vermonters today, the biggest issues are the economy, inflation, and violent crime.”

Mermel holds a master’s degree in American History from Columbia and another in theology from Yale. Much of his business experience includes the relocation of jobs.

“I’ve been responsible for the relocation of over 300,000 jobs over the course of my career, which is almost half the population of Vermont,” he said. “… One of the things that I want to pursue is the federal microchip fabrication plant which our current Senators Sanders and Leahy have ignored. It’s a $2 to $8 billion investment which could allow us to build literally thousands of new jobs in the south and north of Vermont.”

True North Reports asked Malloy and Mermel what they would do to address rising crime across the nation.

“I will support our law enforcement community, I do not want to remove qualified immunity — I think that’s important,” Malloy said. “What I would am looking for is to get back to the vision of our Founding Fathers of limited government — but just enough order that all Vermonters can enjoy the liberty and freedoms and rights of the Constitution.” 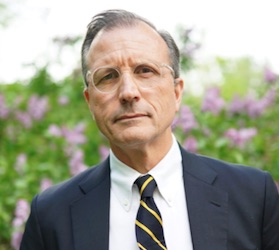 A BUSINESS-MINDED CONSERVATIVE: Myers Mermel, an investment banker, made his case on why his extensive business experience gives him an edge in the race for U.S. Senate.

Mermel said he would be good for police and tough on crime, and he pointed to op-eds that he’s written for True North Reports. In his commentaries, Mermel has focused on the issues of qualified immunity for police officers and on how shortcomings by the U.S. Department of Justice are undermining police efforts here in Vermont.

“In terms of our law enforcement, obviously I’m behind them 100% in the enforcement of their duties,” Mermel said. “I want to make sure that it’s an equal and fair justice system, which I believe we do have. I don’t think we need to dismantle our law enforcement community in order to provide criminal justice.”

Mermel commented on Nolan’s absence, too, which, he says, is becoming a pattern.

“I have seen that she has not been present on the campaign trail for the past 10 days, and it’s important that candidates answer questions in the public,” he said.