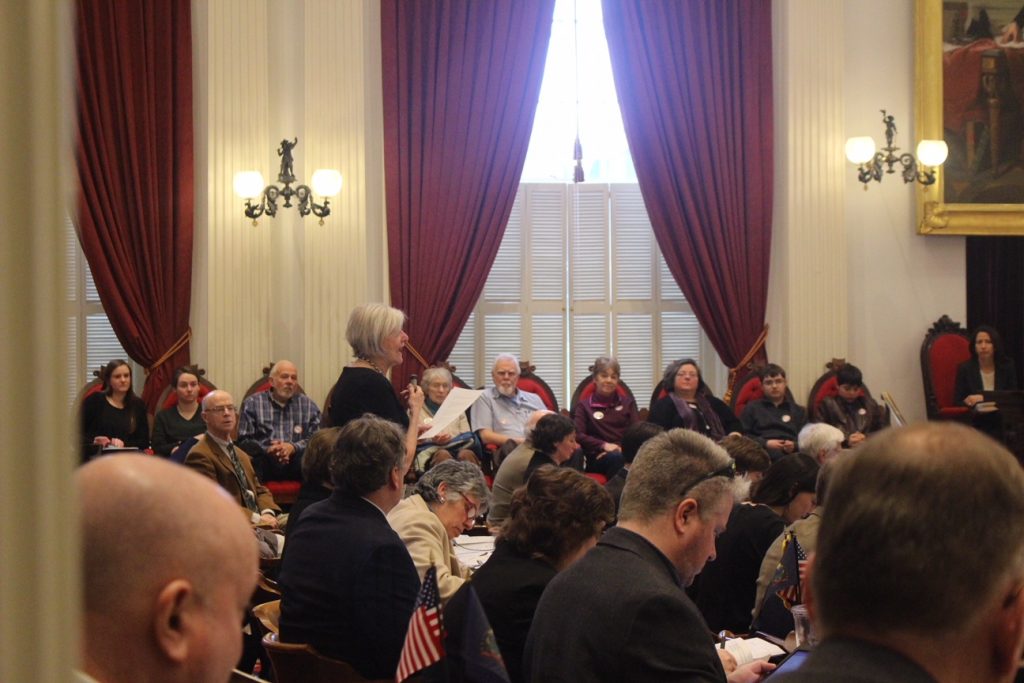 NO RELIEF FOR BABIES IN VERMONT: Rep. Ann Pugh, D-South Burlington, a lead sponsor of H.57, talks about why abortion should be completely unregulated in Vermont.

MONTPELIER — The Vermont House of Representatives on Wednesday voted in favor of an unrestricted right to exterminate pregnancies through all nine months of a baby’s development.

In a session debate that lasted all afternoon and into the evening, the majority Democrats and Progressives shot down amendment after amendment that would have placed minor common sense restrictions on abortion — including parental notification for minors and a ban on abortions after 24 weeks.

Rep. Ann Pugh, D-South Burlington and one of two primary sponsors of the bill, explained the legislation ahead of the marathon debate.

“It prohibits a public entity from interfering with the rights set forth above. It also provides that law enforcement shall not prosecute an individual for inducing their own abortion. It provides that a public entity should not deprive a person of her right to have an abortion, and shall not interfere with or restrict the right of a person to have an abortion through regulation or provision of benefits, ability, services or information,” she said.

The House Committee on Human Services, where the bill originated, has taken many hours of testimony on the bill. Pugh said the committee heard from more than 300 people, both professionals and nonprofessionals alike.

“We ask that you support this bill,” she said. “Women should be able to make this very personal decision without political interference, and that is what this bill provides.”

“There are complications, there are situations that happen with women that maybe aren’t even being reported,” she said. “To ask for better regulations, inspections, safety standards and sanitation, I believe it’s completely in compliance with other ways that we care about living things.”

Strong’s other proposed amendment was for voluntary ultrasounds for women 24 hours prior to an abortion. She said 28 states have similar versions of that health care practice.

Another amendment, put forward by Reps. Carl Rosenquist, R-Georgia, and Robert Bancroft, R-Westford, would have prohibited abortions after 24 weeks, once the baby can survive on its own outside of the mother.

But Rep. William Notte, D-Rutland, spoke on the house floor in defense of late-term abortions.

“These women are facing one of the toughest periods in their life,” he said. “They have named their child, they have designed their nurseries, they’ve put their cribs together, and now they are facing horrific news. What should the legislature do in these situations? We should get out of their way.”

Bancroft, who also offered the parental consent amendment, said parents should be included when it comes to surgical decisions about their children and teen pregnancy.

“I offer this amendment to make sure that parents are aware of a traumatic event in their minor daughter’s life,” Bancroft said. “If she is being abused by an abusive boyfriend or a relative then this amendment could expose the abuse and then not send her back to the abuser.”

Another of his amendments was to have a 48-hour wait period prior to an abortion.

In every attempt to regulate abortion, the “no” votes overwhelmed the “yes” votes.

Strong said Vermont lawmakers are more concerned with protecting animals and honey bees than the unborn.

“In our committee today we talked about our concern about honey bees and how we want to make sure they are not exposed to pesticides,” she said. “We talked about euthanizing pets in humane ways, including feral cats. We talked about how to regulate slaughterhouses to make sure that in the end moments of the life of an animal that they are in complete safety and done in a humane way. … Madame Speaker, we need to worry about protecting our women and protecting how they are treated and what kind of scenarios they are experiencing.”

Pro-abortion advocates in Vermont and across the country fear the landmark 1973 Roe v. Wade decision legalizing abortion will be overturned by the U.S. Supreme Court. In addition, support for third-trimester abortions has collapsed nationwide, with only about 13 percent of Americans saying the practice should be legal, according to a May 2018 Gallup poll.

Republican Gov. Phil Scott, who has received a perfect 100 percent score from Planned Parenthood, has not yet signaled what he will do if H.57 reaches his desk. But earlier this month he reaffirmed his support of abortion.

“I’ve been for a woman’s right to choose and I’ve been consistent with that throughout my political career,” he said. “I’ve said that I want to wait for this process to work its way through. … I’m watching, but it’s a conversation that they need to have first.”

Ahead of Wednesday’s debate, Planned Parenthood of New England sent an email to all representatives before they took to the floor, reminding them that they would be scored on their votes.

“The scorecard will be used as an important reference for future endorsements of PPVTAF IE PAC, as well as in any additional relevant discussions and actions as they arise in our work with the Vermont legislation,” the email said.

“With respect to Planned Parenthood closely monitoring our votes on amendments on the bill and grading us, I don’t really care,” he said. “It’s a matter of conscience and I’m gonna vote with my conscience.”

Earlier this year, over 500 people marched the streets of Montpelier and crowded into the Statehouse to stand for life. A week earlier, a few hundred participated in a smaller Women’s March of a few hundred, which was largely in support of abortion.

Wednesday’s roll call vote ordered a third and final reading of the bill, which is scheduled for Thursday.

CORRECTION: An earlier version of the story incorrectly attributed a quote by Rep. William Notte to Rep. Nader Hashim.