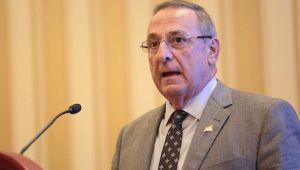 Republican Maine Gov. Paul LePage vowed to fire any sheriff who defied his order to cooperate with federal immigration enforcement officials in a letter sent Tuesday.

LePage explicitly threatened to remove any sheriff who refuses to comply with Immigration Customs Enforcement (ICE) requests to extend the detention of arrested individuals suspected of violating federal immigration law.

“Should any citizen of Maine notify me of any undocumented, illegal alien who was detained and released by a Maine Sheriff following a written United States Customs Enforcement request the alien be detained pending federal enforcement action, I will commence the specific process afforded me under the Maine State Constitution Article IX Section 10,” the letter reads, referencing the statute empowering the governor to dismiss sheriffs for failure to comply with his orders.

The letter appears to be directed at Cumberland County Sheriff Kevin Joyce, who informed ICE in a Sept. 14 letter that he would not comply with requests to hold arrested individuals beyond their scheduled release date, absent a warrant.

Per the federal court ruling in Morales v. Chadbourne,  ICE can only issue detainer requests to local law enforcement in cases where there is sufficient probably cause to suspect a detained individual is in the country illegally.

Joyce argued it is unconstitutional to detain someone past their release date without a warrant, even if there is probable cause to suspect the individual violated federal immigration law and cast his policy as a fiscally responsible approach to avoiding unlawful detention litigation.

“I’m not putting the taxpayers of Cumberland County at risk for holding somebody that we could be left holding the bag on,” Joyce told the Portland Press Herald. “So if you think you’ve got something, get a warrant. We’ll honor the warrant.”

“This is not anti-ICE, this is protecting Cumberland County taxpayers from exorbitant costs if one of these individuals sues us and the case goes bad,” he added.

“We have a couple sheriffs who say they’re not going to be working with ICE,” LePage told Ingraham. “Well, unbeknownst to them, the Maine Constitution says if they don’t follow state law, that I can remove them. So there’s likelihood you’re going to be hearing some stories about sheriffs being removed from their duties.”

Maine law entitles a Sheriff relieved of his duty by the governor to some form of hearing, thought it is not entirely clear what the proceedings would consist of.

One thought on “Maine governor: I’ll fire any sheriff who defies ICE”