In his current re-election campaign against GOP candidate and former state Rep. Don Turner, the hippyish, pony-tailed Zuckerman is leveraging a prime state resource — his office’s public website — to provide would-be voters with invitations to attend screenings of his favorite politically charged films. 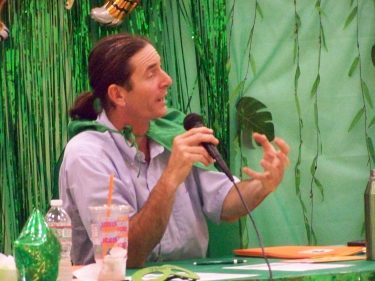 Lt. Gov. Zuckerman’s movie series description: “Our goal is to create an opportunity for conversation around issues currently active in our state and country. A panel and audience discussion follows each movie screening.”

The lieutenant governor’s favorite films are frequently outlandish, one-sided productions that purport to be balanced documentaries.

Zuckerman’s movie screenings, which occur on the fourth Thursday of each month and are free and open to the public, take place in taxpayer-supported places such as fire stations and public libraries around the state capital.

According to Zuckerman’s website, the goal is “to create an opportunity for conversation around issues currently active in our state and country.”

But how balanced are the screenings? The film descriptions reveal that the movies promote a controversial, sometimes paranoid leftist agenda steeped in mistrust of mainstream American approaches to public policy. Documentary topics range from green energy and paid family leave to identity politics and gender studies.

One film recently showcased at a local public screening is “Tough Guise 2,” a sequel to the first movie in the anti-male series by the same name.

The work of gender and race activist Jackson Katz, Tough Guise 2 examines “violent masculinity” and associates mass shootings, bullying, violence against women and other acts of aggression with the “sexist and homophobic messages boys and young men routinely receive from virtually every corner of the culture,” according to the state website.

“Tough Guise”: A feminist view of American manhood and the U.S. military.

The film also attacks the American military community and critiques the state of manhood in the U.S. from an angry socialist-feminist perspective.

“The Devil We Know,” the documentary shown last Thursday, is an anti-corporate lecture about an alleged toxic PFOA (perfluorooctanoic acid) cover-up by the DuPont company in the town of Parkersburg, West Virginia. Under the Obama administration, the Environmental Protection Agency fined DuPont over releases of its Teflon-processing chemical. While Vermonters may think of the Chemfab PFOA contamination reported at the closed chemical manufacturing facility located in North Bennington, the film stirs up unnecessary cancer fears and offers only a weak causal link to southern Vermont.

Zuckerman, who supports a carbon tax, also has provided web users with a link to an anti-fossil fuel film about the use of coal. Titled “From the Ashes,” this movie attacks the Trump administration and its attempt to create a mixed-energy plan for American energy independence. Interestingly, Zuckerman supports divesting the Vermont state pension of investments related to fossil fuels.

Other films in the series include “Reinventing Power,” a Sierra Club look at green energy around the nation, “SEED: The Untold Story,” an anti-GMO tribute to seed keepers who claim to be protecting humanity’s food legacy, and “Zero Weeks, a movie that promotes guaranteed paid leave for all American workers.

The film series, which reinforces Zuckerman’s progressive agenda, may work against the economic interests of Vermonters.

Last week, Moody’s Investors Service downgraded Vermont’s general obligation bond rating from AAA to Aa1. The downgrade relates to Vermont’s low economic and population growth, along with the high leverage cost of one of the state’s triple-A ratings. Calls for divestment of Vermont’s $3.8 billion pension fund, as championed by Zuckerman, are problematic in light of the the downgrade and have been opposed by State Treasurer Beth Pearce and the Vermont Pension Investment Committee.

Campaign opponent Don Turner responded to the Moody’s downgrade by calling on Zuckerman to abandon his push for divestment.

“It is irresponsible, unaffordable, and unacceptable to risk our financial well-being by divesting the state’s pension funds. In response to the Moody’s downgrade, I call on Lt. Gov. Zuckerman to retract his support for divestment,” he said in a campaign press release.

It isn’t difficult to identify who’s behind Zuckerman’s film series. The list of supporters posted on his state website reads like a who’s who of leftist, labor and green activist groups already visible in state politics and the Democratic Party.