It seems like a well-intentioned, health-conscious plan: get more Vermonters out of their cars and onto bicycles and hoofing it. But how practical is the plan on a statewide level, and at what cost to taxpayers?

For Local Motion, a Burlington-based nonprofit bike and pedestrian organization, promoting alternative forms of transportation means transforming existing roads to allow more access for bicyclists and walkers. Now in its 20th year, the organization has become a driving force in reshaping Vermont’s highways and streets for such a vision. 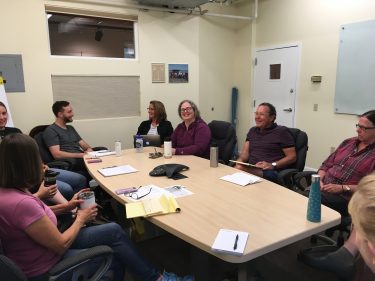 Local Motion’s 11 full-time staffers and 300 volunteer community organizers want Vermonters out of their cars and trucks and on bicycles, or on foot, as a way to reduce humanity’s carbon footprint.

Unabashedly alarmed by carbon-based transportation encroaching on the public, this non-profit has expanded from its Burlington Waterfront base to a statewide presence.

Local Motion’s 11 full-time staffers and 300 volunteer community organizers want Vermonters out of their cars and trucks and on bicycles, or on foot, as a way to reduce humanity’s carbon footprint.

The organization claims it employs no lobbyists in Montpelier. However, Local Motion Executive Director Karen Yakos meets and greets legislators about the group’s concerns. She also is a representative with Vermont Natural Resource Council’s coalition of alternative-minded activists, Transportation for Vermonters.

According to their mission statement, Local Motion’s community organizers want biking and walking to become a way of life in every corner in Vermont — extremes of northern New England’s weather be damned. That change-of-lifestyle makes life a little more burdensome for motorists who don’t give a fig about biking or the outdoors.

Emily Boedecker, Local Motion’s former executive director and now Gov. Phil Scott’s commissioner of the Department of Environmental Conservation, has said Vermonters give too much road space to motor transportation needs. In some of her public statements, she sees automobiles as both an environmental and lifestyle antagonist.

“You combine the entire space given over to our roads, parking lots … [and] we’ve given this all over to transportation. To create barriers where we can’t share the space? It’s a trajectory we can change,” she said.

Given her long history of activism, Boedecker’s transition from bicycle activist to state environmental commissioner could be viewed as a major coup for Local Motion.

According to Luis Vivanco, chair of the Local Motion Strategy Committee, under Boedecker’s past leadership, Local Motion “merged with the Vermont Bike and Pedestrian Coalition to become the statewide advocate for biking and walking, expanded its safe street and traffic design assistance to include 33 Vermont communities, successfully advocated for safe passing legislation and the protection of vulnerable roadway users, expanded the Bike Smart program to deliver over 22,000 hours of training to Vermont kids in 2016, and launched the new Island Line Ferry to provide nearly 15,000 bikers and walkers each year with 100 days of reliable all-weather service.”

While Yakos doesn’t sound as strident as her predecessor, the organization’s mission remains the same, and now has an added bonus: Local Motion’s former executive is now calling the shots in Montpelier.

According to Yakos, Local Motion’s mission has expanded somewhat since its founding.

“I came on a year ago to take all our programs statewide,” Yakos said.

The group’s funding for bike projects across the state mostly comes from foundation grants and private donations, but some taxpayer funds are involved.

“We get some of our funding from grants but we get a lot from our donor community,” Yakos said. “We also get money from bike rentals on the Burlington Waterfront. Grants can also come from foundations, state grants, and family donations.

Yakos said that most of Local Motion’s donors come from around Vermont with most residing in Chittenden County and on the Lake Champlain islands.

“As we start to move into other parts of the state, we’re picking up more donors from these places. On our website we have a map which shows our work with school programs and on the roads,” she noted.

Yakos said whether or not the Green Mountain State is friendly to bicyclists depends upon where you look.

“Vermont is bike friendly but there are pockets which need work,” she said. “Yes, bike tours like to come here in the fall and the ferry at the Colchester Causeway gets 14,000 visitors a year — that’s awesome. We get a lot of international press about the ferry. And while there are those pockets that are bike-friendly in Vermont, rural roads are tough since many roads aren’t locally controlled (such as state and federal highways). That means working with VTrans.”

Yakos believes that all Vermont roads, outside of an interstate highway, can be reconfigured to be friendly and safe for bikers and walkers.

“For better infrastructure, there’s a lot going on. We create pop-up or demo projects to show how things can be done. We’ve done a lot in Burlington. We’re doing pop-up projects in places like Rutland and Bristol and we’re loaning out electric bikes to folks in Middlebury to help familiarize them. … This will help show people what can be done in their community.”

“I don’t know what the costs are, but we try to make these part of VTrans projects already underway,” she said. “It’s not that difficult to add a wider shoulder. Route 15 is being done this summer with wider shoulder. These are neither bike paths nor protected so they may be more suited to long-distance bikers rather than family treks.”

The cost of being bike friendly: In a 2014 report titled “Shared-Use Path and Sidewalk Unit Costs”, VTrans reported that, in 2006, the added cost of on-road bicycle lane construction was between $4,000 and $9,000 per mile. VTrans noted that the cost of a 2010 project in the town of Shelburne, to add four miles of bike lanes along Spear Street, cost approximately $76,000 per mile.

But according to VTrans, the vision of altering state-owned roads to make way for bikes and walkers doesn’t come cheap.

In a 2014 report titled “Shared-Use Path and Sidewalk Unit Costs”, VTrans reported that, in 2006, the added cost of on-road bicycle lane construction was between $4,000 and $9,000 per mile. Multiply those estimates by an envisioned statewide network of bike-access roads and Vermonters can get a rough idea of the high cost of bike-friendliness.

VTrans noted that the cost of a 2010 project in the town of Shelburne, which added just four miles of bike lanes along Spear Street, cost about $76,000 per mile.

“This included adding five feet of shoulder to each side of the road, in addition to a two-foot-wide gravel shoulder,” the report states. “Using VTrans’ average bid prices, a cost of $300,000 per mile for the same type of work was estimated. This is typical of the difference seen between prices of projects done at the local level compared with contracts put out by the state.”

Regardless of who pays for it, bike access comes at a steep price while benefitting a minority interest group of bike enthusiasts and exercise walkers.

But Vermont has a vocal community of bike advocates.

Rick Pingree, an outdoorsman, coast-to-coast fifth wheeler, and avid bicyclist from Rutland, told TNR that while he supports Local Motion’s goals, he admits that changing hearts and minds about motoring for more cyclists and pedestrians is a tough sell.

“In Rutland we attempted to help the city became more bike-friendly and the attempt was shot down very badly,” he said. “… For the last five years, Rutland is in the process of building a three- to five-mile-long multi-use trail from the City of Rutland Recreation Department to the (now closed) College of St. Joseph. It will be a fun trail when finished, but it will not help with traveling on U.S. Route 7 or Vermont Route 4 passing through the city.”

Pingree said that neglect of basic infrastructure in Rutland and elsewhere prevents his desire for more road access for bikers and walkers.

“Sidewalks are impossible and need fixing badly,” he said.

“A few years back, we got together with friends and bicycled Route 100 from the Canadian border to Massachusetts. For the most part, there was no shoulder and the road was deteriorating. We were pleasantly surprised that passenger cars, and 18-wheelers alike, were most courteous and passed well outside the three-foot zone. After having bicycled in almost every state in the Union and Canada, it is in my opinion Vermont is, as a whole, one of the least bike assessable.”

8 thoughts on “Local Motion committed to making rural Vermont bike-friendly, but at what cost to taxpayers?”