A battery-powered electric car caught fire on I-91 in Putney Saturday, August 27 and a shipping container of electric batteries caught fire at the Burlington International Airport Friday, Aug. 26. 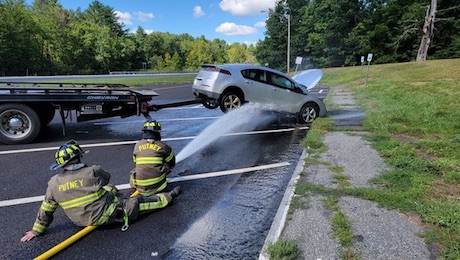 Putney firefighters Saturday extinguish a battery fire on a Chevy Volt EV by lifting up the rear of the car and hosing down the battery beneath the passenger compartment.

On Saturday, “members responded to Interstate 91 for a reported electric vehicle on fire,” the Putney Firefighters Association reported Sunday on its public Facebook page. “We arrived on scene to find an older model Chevy Volt with a light smoke condition pushing from the battery pack under the vehicle.”

Members quickly “pulled an 1 3/4 attack line” to the car and began cooling the failing battery before it could degrade any further.

Mutual aid Tankers from Westerminster were requested and in total over 14,000 gallons of water was used to keep the batteries cool. “A huge thank you to our friends at Rods Towing for lifting the vehicle to give us better access to the battery,” the local firefighters said.

Lithium-Ion battery fires are becoming more and more common as more electric vehicles make their way onto our roads, Putney firefighters said. “The gases they put off when on fire are extremely toxic, if your vehicle or any of your electronics that use Lithium-ion batteries catches on fire move away from it immediately and call 911,” the PFA said.

Friday, a shipping container filled with lithium-ion batteries for the Beta Technologies plant located at the airport caught fire, Seven Days reports. The fire — unlike most fires — was not initially reported to the media, 7D said. The news came out following media requests for information.

The fire was controlled within a half-hour, thus preventing an uncontrollable “thermal runaway” that can occur when batteries burn, 7D reported.