MONTPELIER — Legislators are returning to the Statehouse for an extended two-day session Wednesday and Thursday as Gov. Phil Scott has doubled-down on his proposal to have teacher health care negotiations take place at the state level.

Scott says the change is necessary to save taxpayers about $26 million. His opponents at the Statehouse maintain the savings could be achieved without taking negotiations away from school boards, where they currently take place. 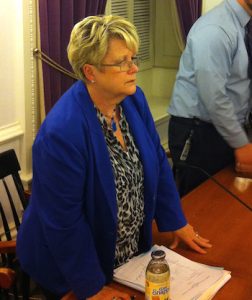 “I think we are all very interested in saving money and having that go to reduce the property tax,” state Sen. Ann Cummings, D-Washington, told True North Reports. “I know the Legislature is not interested in doing the collecting bargaining process, and we most certainly don’t make a decision like that in the last two weeks of the session.”

Cummings said there is a potential compromise in the works that guarantees the $26 million while keeping negotiations local.

“[The compromise] will save a significant amount of money for the property tax, and what it will do is it will guarantee that it falls to the bottom line, that it goes to reducing property taxes and not to, perhaps, hiring a new Spanish teacher,” she said.

Cummings suggested this late-session budget proposal by the governor is out of order with typical legislative process, and she blamed the impasse on Scott, not her fellow majority Democrats.

“There’s been a lot less communication than normal — than [with] every other governor — and I’ve been there quite a while,” Cummings said. “The last few weeks of the session there was regular back-and-forth negotiation among the House, Senate and administration. It hasn’t really happened this year.”

But the Scott administration claims the fight is worth having, especially after the most recent monthly revenues report indicated General Fund revenues for April fell short of projections by $21 million.

“With the potential for a shortfall, it is clear the state cannot afford an FY2018 budget that spends a single penny we do not need to spend,” said Rebecca Kelley, Scott’s communications director. “That’s why the Governor feels it would be irresponsible to leave up to $26 million in property tax savings on the table, which the state could realize through school districts’ more affordable health plans.”

“We have heard loud and clear from school boards around the state that it’s not fair negotiating because they are out-manned every single time,” Turner said. “And the NEA is ratcheting up these negotiations when they go to one district and up everything and then they go to the next district and they have to go above that.”

Turner said Scott’s veto is an essential component to getting negotiations to the state level, and he believes there’s enough support to sustain it. He added that the governor has been adamant that he wants some change in policy to ensure that Vermont taxpayers get relief.

“It may not be the statewide contract, but it’s got to be some mechanism that will protect ongoing savings,” he said.

Republicans accuse Democrats of having a double standard when it comes to state employee negotiating policies, and they point to Democratic support for state-level collective bargaining for sheriffs and state attorneys.

“It was ironic that the majority fully supported that … but on Wednesday night they said that teachers shouldn’t be negotiating with the state because it’s not fair,” Turner said.

He said the NEA was supportive of statewide negotiations when the organization backed former Gov. Peter Shumlin’s push for single-payer health care. Shumlin would have “done exactly the same thing” by taking healthcare negotiations to the state level, Benning said.

Benning said while Democrats are in charge of the discussion coming up this week at the Statehouse, if Scott holds firm, then “I think we have votes in both Senate and House to sustain a veto.”

Michael Bielawski is a reporter for True North Reports. He can be reached at bielawski82@yahoo.com.