Three years after passage by state lawmakers, Act 46 is entering the final chapter of forced school district consolidation, and towns miffed by the state’s power grab are ready to sue to regain control.

The State Board of Education last Wednesday voted 7-2 to approve its final school district outline for the state. The board’s Final Report of Decisions and Order on Statewide School District Mergers, released to the public Friday, reorganizes 50 districts into 18 new governance structures.

David Sharpe, former chair of the House Education Committee who helped oversee the law’s formulation, said he is happy with the outcome. 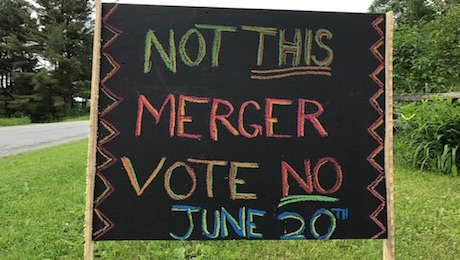 THOU SHALT MERGE: The State Board of Education issued its final verdicts on school mergers, and now it’s up to the districts to submit or fight back in court.

“They did the job we asked them to do; it was a difficult job,” he told True North.

“I am not familiar with specific cases, [but] that’s why the legislature turned this job over to the board who understood the intricacies of this problem,” he said. “I applaud their effort, and I think that … Act 46 has shown to be really good for children’s opportunities and for helping to keep the cost of education down.”

Not everyone is thrilled with the results. Watching closely over the developments was lawyer and former Hazen Union School Board Chair David Kelley, a longtime outspoken critic of Act 46. He currently is overseeing a multi-district appeal of the state’s decisions, which is expected to be filed in court within weeks.

“These districts didn’t look for a fight, [yet they] had their democratic votes rejected by some pretty heavy-handed decisions foisted on them by an unelected board,” Kelley said. “They have every right to appeal those issues.”

According to the Alliance of Vermont School Board Members, Kelley, along with leadership from more than 20 school districts and the public, have been meeting to decide the next course of action. On Nov. 28, the group met with concerned citizens and the school boards of the Windham Northeast Supervisory Union to organize a plan to maintain independence.

Regarding the State Board of Education’s final plan, Kelley said the overall district map was unchanged from recent meetings. “No surprises, except that two board members voted no,” he said.

State board vice chair Bill Mathis and board member John Carroll were the lone dissenting votes.

“I’m grateful that Mathis and Carroll saw that it was a mistake. These small rural towns forced into mergers is gonna hurt them,” Kelley said.

In keeping with the supposedly flexible stipulations of Act 46, many communities made a strong effort to propose alternative districts to the ones put forward by lawmakers. These alternate proposals set out to meet the goals of affordable and high-quality education while forgoing certain requirements, such as having 900 students per district under one board and budget. Almost all of the alternative district proposals were rejected.

Kelley’s local district in Greensboro is being instructed to merge with Hardwick, Woodbury and Stannard. That partnership is not what the communities wanted or expected.

“We were told they couldn’t be merged because of the … structures,” Kelley said. “The people of the agency changed their mind at the last minute. It stinks because essentially the decisions that were made were not based on full information.”

He said small schools grants are another concern. Schools that elected to go after an alternative district structure and subsequently had their plans rejected lost these critical funds — around $40,000 to $100,000 per year. Many of these small schools are located in high-poverty communities.

Barre City School Board Chair Sonya Spaulding told True North that the board’s final vote verified what they’ve already expected, which is they will be forced to merge with Barre Town.

“For us, this just finalizes the plan,” she said. “We had just found out a couple of weeks ago that the State Board was going to merge us.”

A major sticking point for the two districts regards sharing finances. In this case, Barre Town is doing better financially than Barre City. Some critics see a merger as a loss for Barre Town.

In addition to a potential legal battle led by Kelley, political activist H. Brooke Paige has been going after Act 46 in the Vermont Supreme Court to challenge the law’s constitutionality. The outcome of this case is still pending.