With a significant vote on net neutrality set for Thursday, voices from both sides of the debate are hitting crescendos. 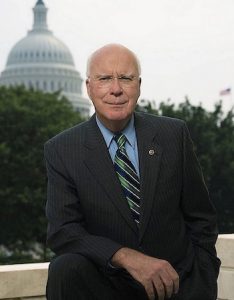 “It is vital that all aspects of the draft order are subject to the same peer review and public hearings you have always advocated. This is necessary to ensure ‘our decisions are based on a robust record,’” the letter reads.

This letter references Pai’s opposition to the adoption of net neutrality back in 2015. Pai was critical of the FCC for rushing it into law without what he considered adequate scrutiny.

“Going forward, we need to give the American people a full and fair opportunity to participate in this process. And we must ensure that our decisions are based on a robust record,” Pai wrote three years ago.

Sen. Richard Blumenthal, D-Conn., is the lead name on the letter, and was joined by Leahy and Sens. Elizabeth Warren, D-Mass., Edward Markey, D-Mass., and Sherrod Brown, D-Ohio.

The letter asks Pai to hold this reconsideration under those same standards.

“We ask that you heed your own advice and delay your planned vote on this item until you have faithfully executed all of the steps outlined above and provided the American people ‘a full and fair opportunity to participate in this process,’” the senators wrote.

Leahy credits himself as one of the primary proponents for net neutrality rules, going as far as to bring the Senate Judiciary Committee into Vermont to hear from local businesses, nonprofits and citizens about why they support net neutrality.

Net neutrality has been a hot-button issue for the bidding war of Burlington Telecom. Support of net neutrality was among the top three criteria the city set for accepting bids. Schurz Communications, which purchased the telecom at the end of November, affirms its support on its website.

“As your local broadband provider, we agree with and support the concept of a free and open internet unfettered by paid pathways or preferential treatment of traffic that favors one party over another,” the company states. “We believe all providers, both ISP’s and Edge Providers, should uphold these same commitments.”

While many argue net neutrality regulations are necessary to protect internet freedom, opponents such as Pai and others say the regulations undermine the free market and give preferential treatment to internet content giants such as Google, Facebook, Amazon and Twitter. Some media reports have noted these companies are lobbying aggressively to save the rules.

Adopted in 2015 at the urging of President Barack Obama, net neutrality restricts internet service providers (ISPs) like Comcast, Verizon and AT&T from offering faster or slower speeds of internet use at different prices, among other restrictions.

Kansas State University economics professor Dennis Weisman told True North that net neutrality halts free market principles by restricting ISPs from offering premium services to those who are willing to pay more. “Regulation should not be in the business of protecting competitors; it should be in the process of protecting the competitive process of consumers,” he said.

“We’ve been operating for 20 years and yet the major telecom companies, with few minor exceptions, have not done these things they are afraid of,” he said.