MONTPELIER — The Senate Judiciary Committee is considering a controversial waiting period for gun purchases after parents of a suicide victim faced off against gun-rights advocates late last week in emotional public testimony. 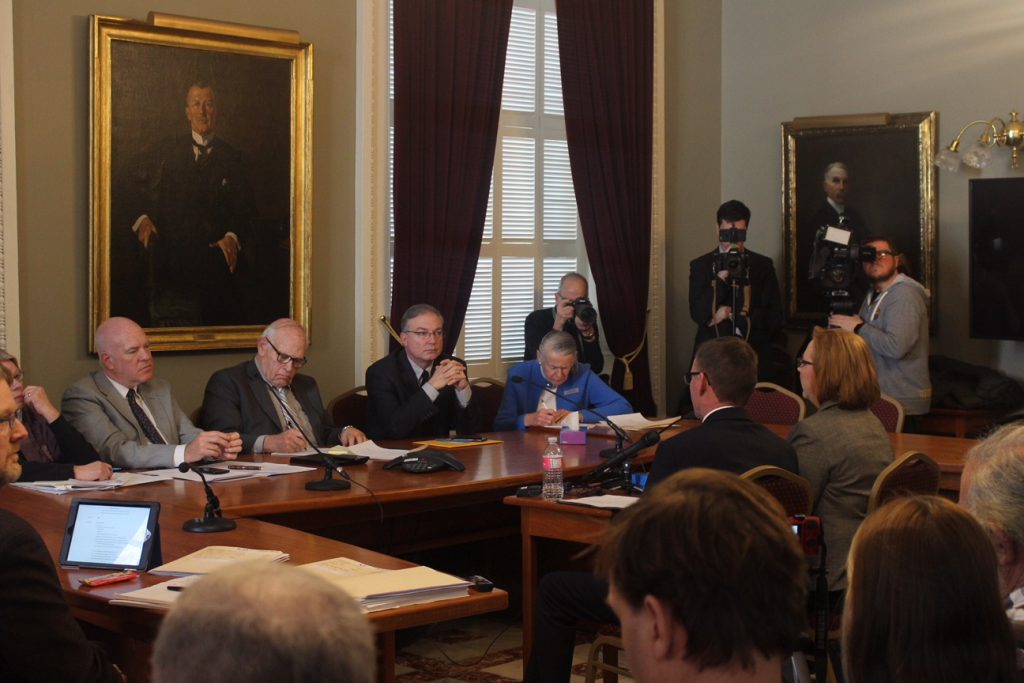 LOST THEIR SON: Rob and Alyssa Black speak to the Senate Judiciary Committee in support of a 48-hour waiting period for gun purchases. The couple lost their son to suicide in December.

On Thursday, Senate lawmakers heard testimony from Rob and Alyssa Black, the parents of Andrew Black, who died from a gun suicide on Dec. 6, 2018, at his home in Essex. The still-grieving couple urged the committee to impose a waiting period as a means of thwarting other potential suicides.

Alyssa Black said they didn’t think their son was depressed, but instead may have had a severe reaction to something on social media.

“It was an overwhelming reaction to a disappointing event in life,” she said.

Rob Black said it appeared that his son purchased a gun from a gun store in the morning and died hours later, around 4 p.m. in the afternoon. Messages on Andrew Black’s phone reveal the distress and anguish he felt at the time.

“Reading through his phone messages to the last day, you could almost sense the doubt in what he was about to do,” the father told committee members.

Sen. Dick Sears, D-Bennington and chair of the committee, asked if delaying the purchase might have helped. Alyssa Black answered that she believed it could have saved her son’s life.

“It would have given him time to come out of it,” she said. “It was a fleeting two-day-long self-pity fest. We absolutely believe if there had been a waiting period he would not have done it. … The only reason anyone needs a gun within 48 hours is if they are gonna hurt themselves or someone else.”

Sears asked if the gun shop owner had any idea their son was about to use it for suicide. The parents said the owner had no suspicions.

“He had a story behind why he was buying the gun,” Alyssa Black said. ” … There were absolutely no signs.”

Gun Owners of Vermont President Ed Cutler, an advocate for gun rights, spoke next. He said there are only three instances of a person walking into a gun shop and committing suicide afterward in the past 20 years. In one of those three cases, more than 48 hours had passed between the purchase and the suicide.

Cutler said a waiting period could harm a different set gun buyers — those who need to purchase a gun quickly for self-defense purposes.

“If a woman is being stalked by an abusive stalker, that waiting period could be the difference between life and death,” he said.

He said data shows the initial hours after a relief-from-abuse order is the most dangerous time for violence to occur.

In addition to human threats, Cutler said dangerous animals are another serious threat in Vermont. “Rabies is a serious problem in this state,” he said.

He added that two-thirds of gun purchases are by those who already own a gun, making a 48-hour wait meaningless in such cases.

“My main concern is there are people who are not meant to be a target of this bill who will be impacted by the required waiting period,” he said. “You can use your imagination as to who those people might be.”

Sen. Jeanette White, D-Windham, asked if existing gun owners could be exempted from the waiting period.

“Is that something that seems workable?” she asked.

Moore said it was an unlikely solution since it would require creating and maintaining a list of all gun owners, something highly frowned upon by pro-Second Amendment groups.

UVM Medical Center pediatric intensivist Rebecca Bell spoke next, but in support of S.22. She said Vermont has a high suicide rate despite relatively low suicide attempts. She argued that high gun ownership is the culprit.

“Even though they are attempting at a lower rate, they are dying at a higher rate because the method is more lethal,” she said.

She said when it comes to suicide with guns, it tends to be more impulsive because it’s a quick and easy action. She said those people who choose other methods such as ingesting lethal substances tend to be more seriously depressed and they think it out more.

“Both this waiting period and the safe storage [component] for me really combine to address some of this impulsivity and suicides for young people in Vermont,” Bell concluded.

“We believe it is an honest attempt — it is, in effect, an effort to save someone from themselves,” he said.

He described the debate as “the right to self-defense versus the intent to save a life.”

In this case, he favors the right to self-defense.

“According to the Vermont Judiciary Annual Statistical Report for 2018, there were 3,380 relief from abuse filings in 2018, which was an increase of 8 percent from 2017,” Bradley said. “Those RFA filings, which become court orders, in these cases represent situations where a victim is able to convince a court that they are in a real threat of bodily injury or even death threats.”

He continued that in these cases of extreme danger, the last thing people need is restrictions on their ability to obtain a means of self-defense.

Bradley, Moore, and Cutler all were against the safe storage provisions of the bill. Moore called it impossible to enforce and said it creates bizarre situations where simply leaving your bedside to use the bathroom could result in a violation of the law if you leave your gun behind.

The Black family was indifferent to the safe storage requirement in the bill, preferring instead to focus on delays that might save lives.