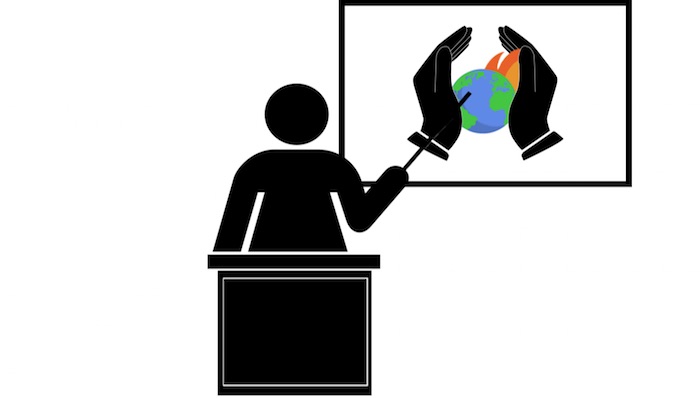 CLIMATE CHANGE AND SOCIAL JUSTICE?: Vermont state senators on Friday heard that efforts to save society from global warming and efforts to fight racism need to be combined.

The Senate Committee on Natural Resources and Energy on Friday took testimony from several witnesses who said environmental justice must incorporate efforts to fight racism.

It would establish an Advisory Council on Environmental Justice within the Agency of Natural Resources to advise the state “on environmental justice issues.”

Kiah Morris, a former state representative and now the movement politics director for Rights and Democracy Vermont, said environmental justice is about “efforts to combat climate change in a just and equitable manner.” She expressed frustration that existing social justice positions in government are relegated to advisory roles.

“The frustration of once again being relegated to an advisory function to appease political sensitivities in order to pass this vital piece of legislation, it continues the harms as discussed,” she said. “We need to be honest about the reticence to give this body meaningful authority, and why that is the case is that it builds a sense of distrust among the communities who are looking for this opportunity to finally be heard.”

The bill offers a definition for environmental justice.

Environmental justice redresses structural and institutional racism, colonialism, and other systems of oppression that result in the marginalization, degradation, disinvestment, and neglect of Black, Indigenous, and Communities of Color. Environmental justice requires prioritizing resources for community revitalization, ecological restoration, resilience planning, and a just recovery to communities most impacted by environmental injustices and natural disasters.

Another witness to testify on the bill was Jennifer Byrne, an Environmental Justice Clinic fellow from Vermont Law School.

“Our fundamental purpose is to craft environmental justice policies for Vermont based on based on the testimony of those who have been systematically excluded from the mainstream environmental movement,” she said.

According to Byrne, the bill would mandate that more than half of all funds be spent on environmental-related causes, and should target “EJ populations.” The bill defines those populations as “based on race, low-income, and limited English proficiency.”

“We need not only to establish this EJ policy in Vermont, we have to set up systems of accountability,” she said. “It’s not just about checking a box and patting ourselves on the back; we need to establish, as you’ve seen in S.148, an EJ Advisory Council, a coalition of advisors from historically marginalized groups who are going to hold legislators and regulators their promises.”

“During this time working on this issue I have not come across anyone who is outwardly opposed to passing such a bill,” he said. ” … The more central question to me is whether the first step that we take on this meets the moment and sets the state on the right trajectory to do this work properly.”

The push for environmental justice comes at a time when Americans are increasingly upset over soaring gas prices, which may soon top $4 per gallon.

President Joe Biden has backed an agenda that would harm the gas producers and distributors. And U.S. Transportation Secretary Pete Buttigieg recently urged Americans to buy electric vehicles as a way to avoid gasoline expenses.

Many Americans will not likely be able to purchase electric vehicles, which can average around $50,000, even with $12,500 in subsidies included in the Build Back Better bill.

Friday’s meeting of the Senate Committee on Natural Resources and Energy can be viewed online in two parts: Part 1 and Part 2.