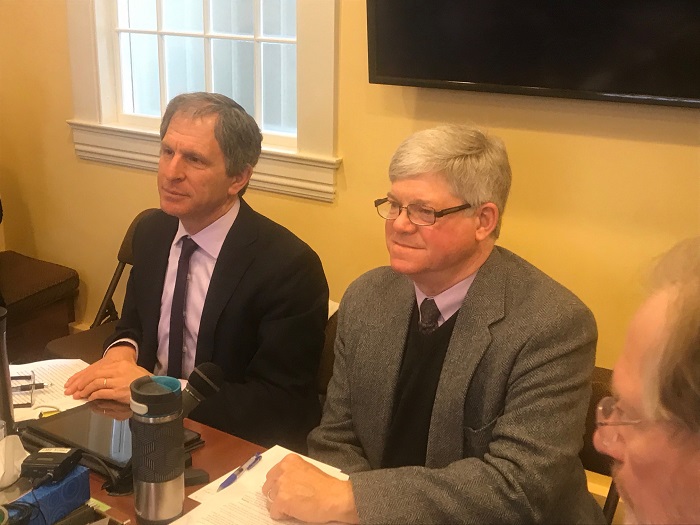 PUSHING GREEN ENERGY: From left to right are David Cash, dean of the Graduate School of Policy and Global Studies for the University of Massachusetts, and Ken Colburn, co-chair of the Energy Working Group of the Maine Climate Council.

Some ideas lawmakers heard during the hearing include the importance of pursuing policy changes even when “democratic consensus” might be absent, and how the state could use advanced communications technologies to turn off appliances in people’s homes.

Ken Colburn, co-chair of the Energy Working Group of the Maine Climate Council, and David Cash, dean of the Graduate School of Policy and Global Studies for the University of Massachusetts, shared testimony. Both men expressed support for H.688, the Global Warming Solutions Act.

As Colburn and Cash reviewed latest trends in green-house gas emissions and target reductions, they discussed strategies to hit those targets, such as overhauling the energy and transportation sectors.

Colburn said that green energy goals should have teeth for enforcement.

“What is not in the bill, and I think it’s good, is no requirements with respect to how decisions are made,” he said. “One would hope and think that democratic consensus is the default, but at the end of the day, you all know far better than I how easy it is to say no to things and how hard it is to get a yes to things.”

Rep. Timothy Briglin, D-Thetford, pointed out that in the Vermont bill, lawmakers would have a say before the new policies get implemented.

“The council may make recommendations to the legislature,” he said.

He also told the committee that modern technology creates the potential for entities to control the energy usage of households.

He also said his associates are predicting dire climate trends in the future, such as a rise in sea level for Maine.

Cash suggested that climate change mitigation efforts can be an economic benefit, and said Massachusetts now has more than 110,000 green energy jobs, up from 60,000 in 2010.

On the issue of promoting electric vehicles for reducing transportation emissions, Rep. Mark Higley, R-Lowell, noted that Massachusetts residents are not buying EVs.

Cash told the committee that the solution is to get more public money to subsidize more purchases, and he cited the Transportation and Climate Initiative as a potential source of revenue.

After the meeting, Cash told True North that he is disappointed that the TCI hasn’t gotten more traction yet among New England states.

“The TCI would use, like the Regional Greenhouse Gas Initiative, market-based mechanisms to both provide the right market signals and the right revenue to move to a future that encourages electric vehicles, encourages public transit, and again that will all ultimately have savings for consumers and businesses,” he said.

Colburn told the committee that the prices of wind and solar power are coming down. After the meeting, he told True North that achieving lower prices depends on where the energy is developed.

His advice to Vermont lawmakers working on the Global Warming Solutions Act is to monitor economic trends.

“Be attentive to the fact that the markets are rapidly changing at this point, particularly in the electric energy sector,” he said. “That dovetails heavily with the transportation sector via EVs, and the home sector via heat pumps for heating and also other appliances.”