The House and Senate Government Operations committees held a joint hearing Friday afternoon to take testimony on how to deal with the upcoming elections if social distancing mandates remain in place.

During the Zoom meeting, Sen. Jeanette White, D-Windham, explained that conducting proper elections has been a top priority of the Legislature.

“One of the very first pieces of legislation that we passed dealt with the upcoming elections because that’s so important to us,” she said, referring to Act 92.

That legislation gives the secretary of state authority to change how elections are run.

Will Senning, director of elections and campaign finance for the Secretary of State’s office, updated the committees on a proposal for how to handle expanded mail-in voting. 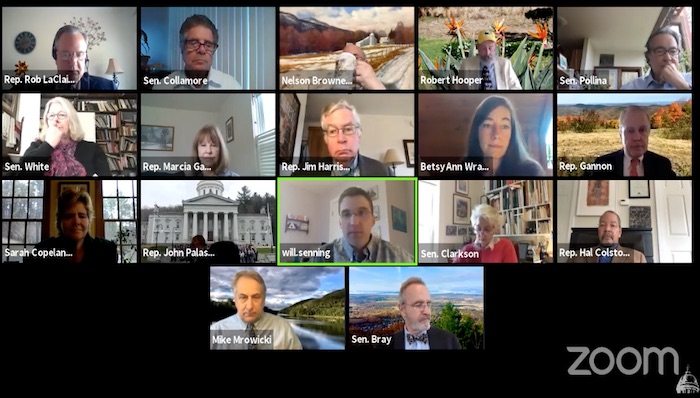 CYBER LAWMAKING: Lawmakers from the House and Senate Government Operations committees met online Friday to talk about how Vermont will do elections this year.

One of his proposals for the November general election is to have an absentee ballot mailed to every active voter on the state’s registration list, including a pre-addressed and pre-paid return envelope. The August primary elections, in contrast, will be request-only for mail-in ballots.

These proposals could be approved as soon as this week. Senning said changes are contingent on reaching agreements with the governor’s office, but that the first priority is to protect Vermonters from “this very highly contagious and highly deadly disease.”

Another proposal from the Secretary of State’s Office is that inactive voters this summer would get a card in the mail asking about voting. If the state receives no response, and the voter has been inactive for at least two federal elections, that person will be removed from the state checklist. According to Senning, Vermont has about 480,000 voters, and approximately 30,000 are inactive.

Voters also can expect to see an education component mailed out, explaining the mail-in ballot process for the November general election.

“If we’re going to dramatically increase that, obviously there’s going to be a greater opportunity for returns that are fraudulent,” Harrison said.

He asked what happens if a ballot gets mailed to an address that the voter no longer occupies.

“Does it end up in the hands of the new occupants?” he said.

Senning said it should be mailed back. He added that there’s a “certificate envelope timed and dated by the voter” that the ballot goes into before it gets mailed back to the clerk.

Harrison noted a case in North Carolina in 2018 that resulted in a court nullifying election results. A third-party intercepted some ballots and returned them directly to the clerks. He asked if such a scenario might be possible in Vermont.

Senning said intercepting ballots is illegal and would be prosecuted.

Harrison shared that his wife dropped off his ballot for him during the previous Town Meeting Day, and wondered if that means anyone can turn in ballots on behalf of others.

Senning said ballots can be dropped off by someone else as long they are signed by the intended voter, and he downplayed the prevalence of election fraud through the mail system.

“There are way better ways to influence the outcome of an election than to engage in criminal absentee ballot fraud,” he said, adding that there has been no mail-in voter fraud cases documented during his several years working in the office.

Sen. Brian Collamore, R-Rutland, commented that the governor should not be pressured to accept these proposals.

“I think by pushing this letter, and that’s fine if that’s what people want to do, you are in essence asking the governor to agree to the two proposals [for the primary and general elections],” he said.