As stickers of the elusive Patriot Front group start to pop up again in Vermont, local law enforcement continue not to be able to confirm that the group physically exists within the state.

“We’ve seen them pop up randomly and I know that they have been here previous to me starting here,” St. Albans Police Chief Maurice Lamothe told True North in an interview Tuesday. “We have not positively identified anyone that’s put them up at this point.”

St. Albans has been the subject of mysterious white nationalist stickers and a “blackface” incident.

“They have been put on more or less public property — meaning signs, some telephone poles, power boxes. That type of stuff is historically where they have been located at this time, and they are in very populated areas: the public park, Main Street, stuff like that.”

Lamothe added that no conclusive investigations have identified the group or its purpose. 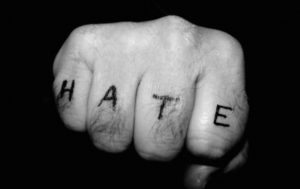 A white supremacist group called Patriot Front is having its stickers show up across the state, but so far law enforcement has little else to confirm the group actually exists in Vermont.

“I have no way of knowing who put them up or what their purpose was,” he said.

“I haven’t talked to a single other agency that has identified anybody, so I don’t know. We haven’t had any further action, we haven’t had any protests, any people that stand out or show up at events. All we’re getting is propaganda.”

He said the actions are hurting the community, no matter who is responsible.

“I wish that they didn’t because it doesn’t lend to our community and what we are trying to build here — you know a united equitable community,” he said. “It’s not good for that thought process and it was disheartening for us at the department.”

When asked for details about Patriot Front, Adam Silverman, public information officer for the Vermont State Police, referred True North to the group’s website, and to profiles written by groups such as the Southern Poverty Law Center.

“VSP does not track protected First Amendment activities of groups in the state. You may find more information on Patriot Front’s own website, in various news reports in Vermont, and from organizations such as the Anti-Defamation League and the Southern Poverty Law Center that track hate groups,” he wrote.

Patriot Front has not responded to TNR’s request for comment. The group is often described as a fringe conservative group that wears masks in public so that media and witnesses can see them while remaining anonymous.

News reports on the group’s presence in Vermont typically consist of vague details related to the presence of stickers and posters.

“In Vermont, Patriot Front has been active since 2018,” stated a Buzzfeed article last October.

“One of its most disturbing incidents came in 2019, months after the Pittsburgh synagogue shooting, when the Ohavi Zedek Synagogue, an LGBTQ center, and the Burlington Free Press, which had been doggedly reporting on the group, were vandalized,” the article on Buzzfeed states.

On social media, the Patriot Front stickers are the main evidence used to say that white supremacists are abundant.

The Patriot Front is bragging about placing stickers in Hinesburg.

If you are unaware, The Patriot Front is an American white supremacist, neo-Nazi, neo-fascist and American nationalist group.

If you see these stickers let me know and I will go remove them.#vtpoli pic.twitter.com/Du2HdtseOe

Social justice activists continue to claim, without evidence, that racism is pervasive in the state.

When Vermont’s executive director of racial equity, Xusana Davis, met with environmentalists in June, she said, “You have to cage your heart in preparation for hate and wear this private armor and hear from people with lived experience. … We have members of dominant groups who just live where they want to live because they want to live there, and considerations don’t necessarily hinge on where will I be safe.”

In 2019, Williston Police Sgt. Bart Chamberlain told True North that, despite reports of the stickers appearing in the Williston area, there was no tangible evidence of the group’s existence there either.

“This is my 26th year that I’ve worked here, (and) in all my professional career I am not aware of any members of such group that reside here in Williston,” he said.