The Vermont House of Representatives on Wednesday morning elected Jill Krowinski (D-Burlington) speaker of the 2021-2022 biennium by 138-7 vote. “The 2021 session will be remembered as the coronavirus recovery session,” she said in acceptance speech.

Krowinski did not choose to conclude her oath with “so help me God.” Lawmakers have the option of so swearing or by saying “affirm under the penalty of perjury.” 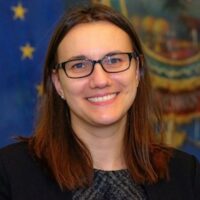 Krowinski and several other House leaders and staff members met in the Well of the House. All others attended via Zoom. No other Speaker candidates were nominated. Her nomination was seconded by Republican Tom Burditt (R- West Rutland), who praised her personal support for his leadership on a child sex abuse bill. It is not known yet who voted in opposition.

BetsyAnn Wrask, the sole nominee for House Clerk, was elected 147-1. All legislators took the oath of office.

3 thoughts on “Krowinski elected House speaker, pledges 2021 will be ‘the coronavirus recovery session’”