Sen. Amy Klobuchar of Minnesota went after Sen. Bernie Sanders during Thursday night’s Democratic debate on his Medicare For All position.

“And while Bernie wrote the bill, I read the bill,” Klobuchar said during the debate, referring to Sanders’s health care plan, which involves dinging private health care insurance in exchange for universal health care. Klobuchar went after the Vermont senator for doubling down on the idea of eliminating private insurance. 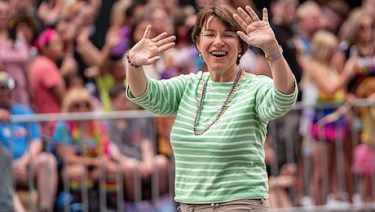 She added: “And on page eight — on page eight of the bill, it says that we will no longer have private insurance as we know it. And that means that 149 million Americans will no longer be able to have their current insurance. That’s in four years. I don’t think that’s a bold idea, I think it’s a bad idea.”

Sanders has routinely campaigned on his plan to nationalize the U.S. health care system and provide so-called “free” health insurance to every individual. The plan is estimated to cost more than $32 trillion over the next decade.

“And if you notice, nobody’s yet said how much it’s going to cost the taxpayer. I hear this large savings, the — my friend from Vermont says you’re going to give back, got a cut in wages because you got insurance,” Biden said during one part of the Houston debate.

“They’re going to give back that money to the employee?” he said. “For a socialist, you have a lot more confidence in corporate America than I do.

The Vermont senator defended Medicare for all to former Vice President Joe Biden, a defense that included the word “damn.”

“That’s right, Joe,” Sanders said. “Status quo over ten years will be $50 trillion. Every study done shows that Medicare for all is the most cost-effective approach to providing health care to every man, woman and child in this country.”

“I wrote the damn bill, if I may say so,” Sanders added.

ABC News warned candidates on Thursday ahead of the debates that swearing would not be tolerated.

“We wanted to take this opportunity to remind you that, as the debate will air on the ABC broadcast network, we are governed by Federal Communication Commission indecency rules,” an ABC News memo states.

“We will not be broadcasting on any delay, so there will be no opportunity to edit out foul language.”

The warning follows 2020 presidential candidate Beto O’Rourke’s statement following the El Paso shootings during an interview with CNN, “Yes, this is fucked up.”

“We’re averaging about 300 mass shootings a year,” O’Rourke said. “So yes, this is fucked up. If we don’t call it out for what it is, if we’re not able to speak clearly, if we’re not able to act decisively, we’ll continue to have this kind of bloodshed in America. And I cannot accept that.”

2 thoughts on “Klobuchar piles on Bernie, says his Medicare for All plan will toss Americans off their insurance”