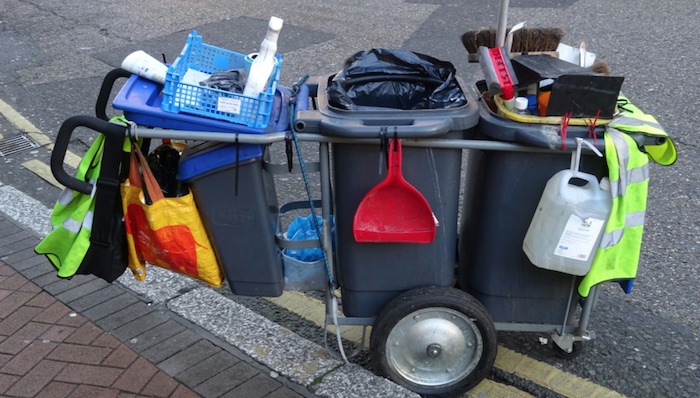 We would be completely remiss if in recognizing those who were on the forefront in the battle against COVID-19, we did not give recognition to those who cleaned.

Throughout the country, in every state and locale, there has been countless praise heaped upon those who are serving in the health care, nursing home, policing, delivery, security forces, pharmacies, grocery stores, media, and all other first responder roles. And every utterance of praise for them is so well deserved.

And then, of course, there is another “army” who is also providing a vital service at this most critical of times — the army of cleaners. At times, they may be referred to as janitors, custodians, wipers, or environmental engineers — it doesn’t matter. What does matter is what they are doing.

On March 23, 2020, in the Wall Street Journal, reporters Lauren Weber and Chip Cutter did an excellent job in their piece, “Janitors Take Front Lines, Adding Danger for Same Pay.” In essence, they point out the work cleaners do and how dangerous it has become. Furthermore, they also note that such workers are at the low end of the pay scale and lack, in many cases, basic health care insurance.

For many who are in the cleaning business, there has been a significant drop in work due to the closing of offices, stores, schools/colleges, recreation areas, and most other areas where the public congregates — but by no means all places.

Here in Vermont, there is a smaller army of cleaners doing all that they can to keep places where people congregate free of germs. We may not be conscious of it when we go to the grocery store but someone, a stranger to us, had wiped down the aisles, shopping carts, counters, and shelves.

The above is repeated constantly in our state’s senior residential facilities, where the danger of COVID-19 spreading is at its highest and, with that, the risk the cleaning personnel face each day.

And then, of course, is the need to have our hospitals and medical facilities cleaned around the clock. Someone has to do it and we have hundreds of Vermonters doing just that.

If President Theodore Roosevelt were alive today and observing what was taking place — in particular those who are doing the cleaning — he might say to them: “Far better it is to dare mighty things, to win glorious triumphs, even though checkered by failure, than to take rank with those poor spirits who neither enjoy nor suffer much, because they live in the gray twilight that knows not victory nor defeat.”

We will, as a country and state, defeat the coronavirus. Yes, at a severe cost, but it will be defeated. And when that happens, we will owe a great deal to many who, at the moment, are complete strangers to us — but who had but one mission and that was to keep us safe.

We would be completely remiss if in recognizing those who were on the forefront, we did not give recognition to those who cleaned. In their article, Weber and Cutter quote a cleaning contractor who is on the front lines in Orlando, Florida, “We are an afterthought of an afterthought. Nobody really talks about the janitors.”

Well, that might be so, but one prominent American once did, and said:

When the time comes, and it will, to honor all of those Vermonters who displayed great courage, commitment, and capabilities during the pandemic, I hope that those who were deep in the fight — our janitors, custodians, wipers and environmental engineers — are recognized for also protecting all of us.