Editor’s note: This commentary is by Julia Purdy of Rutland, a freelance journalist and retired college instructor.

“A rose by any other name would smell the same,” wrote William Shakespeare. Not so apparently, in the Raider vs. Raven standoff here in Rutland. The cancel culture has reached Rutland in the form of challenging the racist implication of the Raider team mascot, an arrowhead.

Symbols have meaning, it is true. But the meaning may run deeper than we think. In the case of the Raider arrowhead, let’s unpack it. It’s an arrowhead, an obvious symbol of hunting and defense. White settlers did not use bows, they used muskets. The native inhabitants of Vermont used spears and arrows to secure their livelihood — but these were ineffectual against firearms. Nevertheless, the arrowhead motif more than suggests a brave defense against an intruder, i.e., the settlers and colonists who were invading like cicadas, consuming everything in sight.

Is retiring the Raider arrowhead a way of “whitewashing” history to suggest that the native tribes were accepting of our intrusion, or even did not exist (as Gov. Howard Dean embarrassingly asserted)? 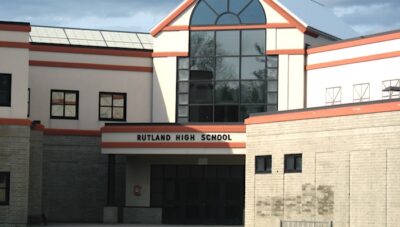 I recall that the symbol of Interstate 90 in Massachusetts — the “Mass. Turnpike” — was retired, but I don’t know exactly why or when. The symbol used to be an arrow stuck in a Puritan’s tall, buckled hat. The Massachusetts Bay Colony and its land-hungry immigrants fomented many deadly skirmishes and outright wars with the whole array of tribes who occupied Massachusetts from Cape Cod and Quincy into the Berkshires.

Whom did the Turnpike symbol offend? If I were an indigenous person I would feel proud that my people stood tall against the intruder. As a descendant of that intruder, I might feel comforted that our shameful conduct against the tribes was finally buried under a more socially palatable — or culturally biased — symbol.

Which brings me to the whole issue of cancel culture. This is supposed to be a democracy, where every point of view can be entertained and evaluated for its accuracy, where the offended party can stand up and be part of the discussion. Who, exactly, is offended by the Raider arrowhead or the arrow through the Puritan’s hat? Only by hearing all sides — as we do in our courtrooms — can an equitable resolution be reached.

Furthermore, these symbols are intended to convey a historical meaning, enter the cultural and national memory through language. The prime examples are place names and street names. John F. Kennedy was honored in the renaming of an airport. Dr. Martin Luther King Jr. was honored in the renaming of countless boulevards and highways. Each place name begs the question: who was that person and what did he or she stand for?

This is especially important for the next generations, who may be growing up amid a sanitized, “family-friendly,” disingenuous culture in which the bad guys are gone, the ugly truth is shoved under the rug and the world is made over into a rosy and safe place. All is sweetness and light. None of which is true. No wonder our kids are experiencing a bad case of cognitive dissonance.

Even further, the presence of the statue or the place name of a figure we love to hate would be a constant reminder of what was and is still likely to exist in our midst: a living reminder of the need to maintain vigilance against its recurrence, in other forms or individuals.

From 1990 to 2002 I lived in Spokane, Washington, right across the Idaho line from Richard Butler’s Aryan Nations compound. The skinheads who found refuge there were not an uncommon sight around downtown Spokane, and their presence definitely dimmed the luster of an attractive little early 20th century city. Occasionally they would single out a person of color to try to eliminate from this world. Butler was, rightly, put out of business by the Southern Poverty Law Center.

On the west end of the Spokane River gorge, on a bluff with sweeping views, a road leads to the Spokane Falls Community College campus: Fort George Wright Drive. The city of Spokane changed the name to Whistalks Way, for the spot is the site of Fort George Wright, an outpost of the army that served many uses over the years, including the imprisonment of Wobblies (International Workers of the World) during the Spokane Free Speech Fight, 1909-1910.

The story is well known to locals. I learned of it from my neighbors. The original post was the launch pad for a vicious raid on the Spokanes, who were neutral during the Indian wars and farmed the Spokane River valley. But tribes much farther away had actively fought the encroachment of settlers and federal government, and after the defeat of a military unit miles away, a scorched-earth policy was initiated that reached hundreds of miles, into the Spokane valley, led by Gen. George Wright — a Vermonter born, a graduate of Norwich.

At harvest time, Wright’s soldiers swept through the valley in a four-day campaign known proudly as “The Battle of Spokane Plains.” Well, it was no battle, but a rout. It featured the burning of crops and native storehouses full of harvested grain, and against military regs he hanged any Indian who opposed him.

At a camp on Latah Creek [a small tributary at the west end of downtown], Wright allowed some of his conquered enemies to come into camp to make peace. Wright arrested and summarily executed at least 16 of these natives without even the usual pretense of a trial. Wright’s brutal tactics would earn him the ire of the natives and the appreciation of white settlers, who came to call this tributary of the Spokane River by a new name, Hangman’s Creek.

Ahead of the blue-coated storm the people hustled their pony herds into the hills as best they could, but hundreds of ponies were trapped along the river. Wright’s men threw a corral around them and proceeded to shoot them like fish in a barrel. One of Wright’s soldiers who loved horses later lamented in his journal that he could not bear the screams of the mares for their foals. The spot became known as Horse Slaughter Camp. The pile of bones remained for years and white farmers picked it to create bone meal fertilizer for their farms.

This particular story ends in a particularly enlightened way. Fort George Wright was named as a reminder of the “pacification” of the Inland Empire. But early this year, the city of Spokane changed the road name to Whistalk’s Way, after a woman warrior of the Spokane Tribe who fought against Col. George Wright. She was the wife of Qualchan, a Yakama sub-chief who was killed by Wright.

The site itself kept its name, Fort George Wright.

At the end of the time I lived in Spokane, a historical marker and kiosk appeared at Horse Slaughter Camp telling the story. But until then, how would I ever have known about this episode had I not asked: “Who was General George Wright?” Now I can ask: “Who was Whistalk?”

Back here in New England, Mount Greylock in the Berkshires is named for one of the resistant chiefs who declared war on the white men — an appropriate tribute.

The good news is: projects such as the Holocaust Museum, the rediscovery and acknowledgement of the assault on the successful, peaceful Black community in Tulsa, Oklahoma, the opening of the slave cabins at Mount Vernon, all attest to a healthy recognition that atrocities and inequities are woven into the very fabric of history.

Here in Rutland, the issue should not turn upon parliamentary procedure. It should turn upon defending historical honesty. The native people in Vermont lived peaceably with the few white settlers but they were not mere helpless victims: they had their own rivalries, then they were thrust into the middle of our war with England and compelled to take sides for their own survival. The tribes fought back, is my point. There many examples, including the attack on Samuel de Champlain (who asked for it); then there were the massacres such as Deerfield and Lancaster, both in Massachusetts. Later, there was the Royalton Raid and other hostage-takings for the purposes of negotiation.

A group of stone markers on Route 106 in Weathersfield memorializes the captivity of Susannah Willard Johnson of Charlestown, New Hampshire. Zadock Steele of Bethel and Mary Rowlandson of Lancaster, Massachusetts, and others were the subject of captivity narratives that can be read today — eyewitness accounts of those actions. Metacom — speaking of renaming, the English called him “King Philip” — held court in Vernon at the end of the war named for him to negotiate the return of white hostages in exchange for food for his starving people.

Yet all of those narratives offer valuable historical fact and some of them even show a surprisingly balanced view of their Indian captors.

The cancel culture shows signs of wanting to scuttle anything that might “trigger” feelings of unease, fear or guilt in onlookers. “We don’t want to hear about that” leads to “We don’t talk about that,” which inevitably leads to “Out of sight, out of mind.” When that policy creeps into history textbooks (there are examples) then we have lost any hope this nation has of achieving the equitable outcomes in the future that we claim to want.

Let me put it this way: It is precisely because we have not suppressed these symbols up to now —  whether equestrian statues, marble busts, boulevard names, or sport team mascots — that we have the knowledge we do have. There is more to be uncovered through open questioning. Destroying these symbols, whether burning, burying or papering them over, is a teaching and learning opportunity lost to the next generations.

One thought on “Julia Purdy: Raiders vs. Raven standoff about far more than just a team mascot”