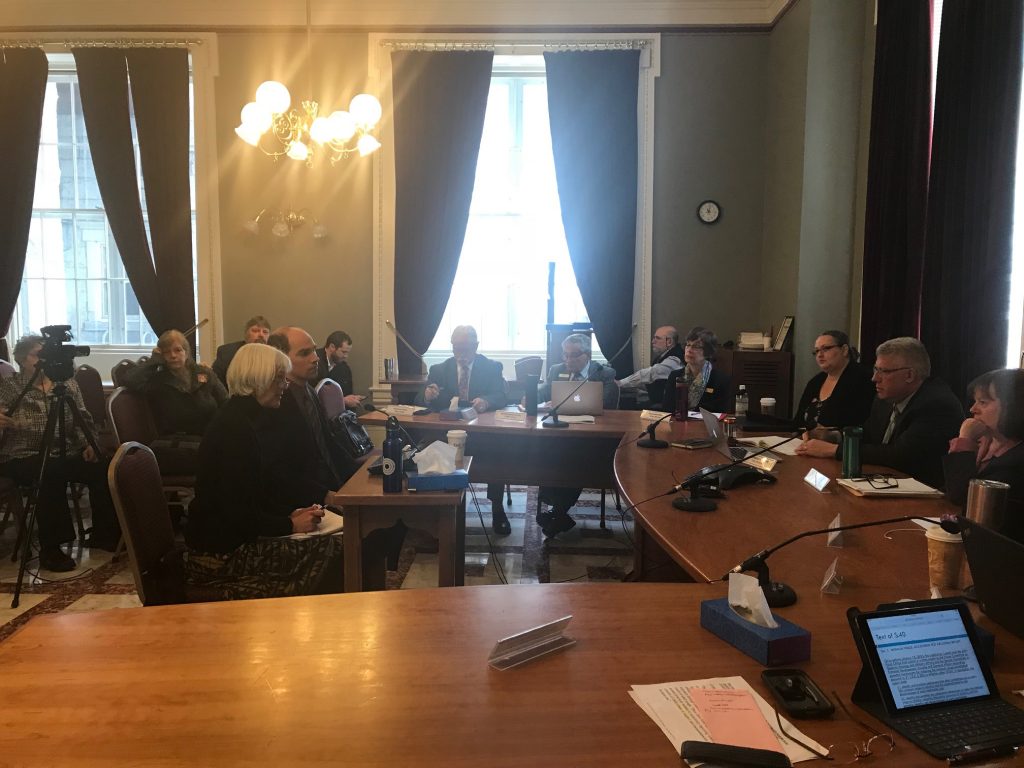 WAGE FALLOUT: Legislative council staff Damien Leonard and Joyce Manchester on Wednesday go over an impact assessment of what a $15 minimum wage would mean for Vermont’s economy.

MONTPELIER, Vt. — The House Committee on General, Housing, and Military Affairs on Wednesday examined raising the minimum wage to $15 an hour, despite signals from the governor that such a measure would get a veto if gets to his desk.

In a hearing before lawmakers, Damien Leonard and Joyce Manchester of the Joint Fiscal Office gave a two-hour presentation on the expected impact of raising the wage.

Their report, titled “The Minimum Wage: Background, History, and S.40,” forecasts annual disemployment of 2,250 jobs for the years 2028 through 2040, which accounts for a 0.5 percent reduction in total Vermont jobs per year. They also project a 0.3 percent loss to state gross domestic product.

The report lists gas stations, retail, restaurants and manufacturing among the long list of jobs likely to be adversely affected by this bill.

“It’s a job’s killer,” committee member Rep. Vicki Strong, R-Albany, told True North after the presentation. She added that the bill is likely destined for a veto, as Gov. Phil Scott stands opposed to placing new burdens on businesses.

By comparison, New York plans to raise its minimum wage to $12.50 by 2021. Each year after that the wage will increase by a percent determined by the budget director until it reaches $15.00.

Leonard said raising the wage also affects the the so-called benefits cliff, which is when welfare benefits drop suddenly as a person’s income increases. He said the cliff could be especially serious for families who receive child care financial assistance.

“You see a dip, it’s really more of a down-slope, and creates an area where their wages are not increasing as fast as the lost benefits,” he said. “And so there’s actually a disincentive to take a higher paying job or work more hours.”

Some of the benefits programs suspected to need to readjust to a wage hike include Medicaid, Reach Up, energy assistance, and earned income tax credits.

Rep. Kevin Christie, D-Hartford, suggested those who need the most help could get hurt by this.

“This is an important cliff — it affects the families at the very lowest end of the financial spectrum,” he said. “That decreasing aid up to that 200 percent [of the federal poverty level] is really [going to hurt].”

This is important because when the minimum wage was being discussed over at the Senate Economic Development Committee, Mat Barewicz, the Department of Labor’s economic and labor market information chief, told them that small companies are going to struggle meeting this law. He also said that larger companies will be more inclined to move towards advanced automation technologies to replace human staff.

Rep. Thomas Stevens, D-Waterbury, the committee vice chair, wondered if negative consequences of raising the wage would be especially challenging for small businesses.

“What numbers here can we look at that might illustrate the potential effect … simply the number of lost jobs isn’t enough to say that this will have a negative impact on the general store or the supermarket. Is there anything in this report that talks about the impacts on smaller businesses?” he asked.

Manchester replied that restaurants, retail, childcare and other small employers might get hit the hardest, but the report offers no forecast on how many businesses might close.

“A number of these industries could be adversely impacted,” she said.

Leonard said the high minimum wage in Seattle, which went from $9.60 to $13 in just 21 months, is a useful case study for Vermont to consider.

A 2017 study of Seattle’s wage increase by the National Bureau of Economic Research concluded that “the second wage increase to $13 [had] reduced hours worked in low-wage jobs by around 9 percent, while hourly wages in such jobs increased by around 3 percent.”

“Consequently, total payroll fell for such jobs, implying that the minimum wage ordinance lowered low-wage employees’ earnings by an average of $125 per month in 2016,” the report adds.

Leonard said that while Seattle is an important comparison, “the Seattle raise was a very quick and steep rise.”