The report suggests that school-age children ages 6 to 17 will decrease by 5.3 over the next decade, as a continuation of an ongoing trend that Vermont schools are losing students.

In 2017, Gov. Phil Scott highlighted that trend, noting that the state’s education system at one time was intended to serve120,000 students, yet has declined to around 80,000. 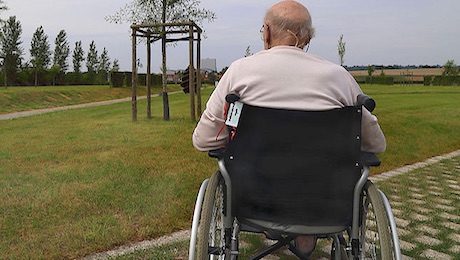 VERMONT’S FUTURE: Vermont’s status as one of the oldest population states in the nation is going to accelerate over the next decade, according to new estimates from the Joint Fiscal Office.

The analysis also forecasts a “hollowing out” of adults in their peak earning years of ages 45-64, as well as a “significant increases in seniors in their traditional retirement years throughout the period,” meaning ages 65 and up.

Vermont already has one of the oldest populations in the nation. As of 2017 the median age is 42.7 years old whereas the national median age is more than five years younger, at 38 years old.

McFaun noted that nursing home and in-home care are very expensive options for families taking care of loved ones during their later years.

Not everyone agrees an increase in the elderly population is entirely negative. Mary Hayden, director of development and communications for the Central Vermont Council on Aging, sees a silver lining to an aging population.

“Media reports and policymakers often point to the perils brought on by our rapidly aging state — fewer younger workers to support elder Vermonters, downward pressures on state revenues, the looming labor shortage, the challenge of funding more services for aging Vermonters, etc. [But] many of these reports omit the opportunities gained from a healthy aging population that will live longer,” she told True North in an email.

Hayden said Vermonters today are working beyond traditional retirement years and will continue to contribute to federal and state income, including social security and other social programs.

She added that older people tend to be generous and serve in roles that aren’t always measured in conventional economics.

“Aging Vermonters have one of the highest volunteer rates in the country, contributing free services to our economic and social well-being,” Hayden said. “They contribute millions of hours in free caregiver services to their parents, spouses, partners and loved ones, saving billions in health care dollars. Many more are raising grandchildren who would otherwise languish in foster care at great expense to taxpayers.”

Monica White, director of operations for the Vermont Department of Disabilities, Aging & Independent Living (DAIL), said the state’s plan on aging serves as an important guide for how Vermont is responding to the various challenges that accompany the demographic shift.

“The demographic shift does include challenges over the next few years, including but not limited to workforce shortages, Alzheimer’s/dementia, chronic disease incidence, and funding and resource limitations,” she told True North. DAIL is committed to working together with Vermont’s strong network of valued community partners to capitalize on our state’s many strengths and build systemic resiliency to address the needs associated with our changing demographics.”

On the other end of the age spectrum is the shrinking younger crowd, which directly affects education costs. While the number of students and families participating in — and paying for –education keeps shrinking, the faculty levels being funded in Vermont schools have remained constant.

“We already have the facilities, we have a teaching staff and administrative staff in the schools and all kinds of support staff,” McFaun said. “So unless you cut down on staff, the problem with the cost of education is going to continue.”

He added that the other reason that costs keep rising is that even while some schools are able to keep spending per pupil down, others are continuously spending more, which “force other towns to pick up the slack.”

“As long as we keep doing that, you are not going to be able to stabilize the taxes,” he said.