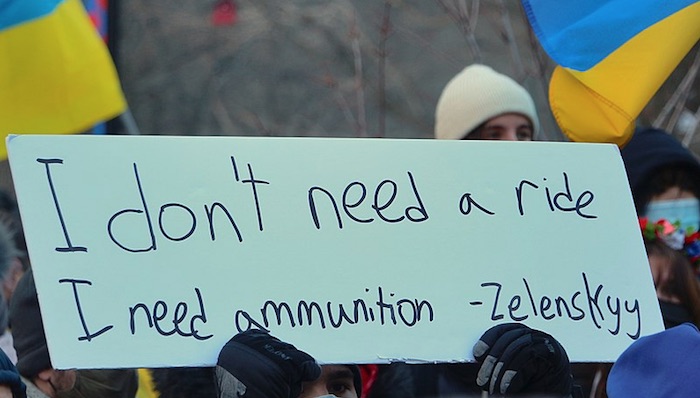 Per the mainstream media, the war in Ukraine is entirely about white supremacy. Articles by the usual far-left racist agitators have proliferated, analyzing the conflict through a race-only lens.  Instead of proffering any solutions to save human lives (of any color) in Ukraine, or to maintain global stability, these efforts will achieve the opposite. Conflating foreign conflicts into a global race war has no redeeming qualities.

The audacity of this race-hate bears close resemblance to the vile race-baiting propaganda that fueled destructive division by exploiting George Floyd’s death. As with Floyd, anecdotes are being employed to stereotype an entire nation. Fault for all evils is centered on race only. No solutions or positives of any kind are offered.

A recent headline platforms obscure neo-Nazi groups: “White supremacists condemn Ukraine conflict as a ‘brother war’: some blame Jews.” Why consult international foreign policy experts when the ADL can ferret out unknown right-wing groups such as the “Indiana Active Club” and “White Lives Matter” as authorities for direction on Ukraine? Americans would never even know the irrelevant views of that minuscule minority if the far-left fascists weren’t mining it like gold flake to weaponize their race propaganda.

An MSN video and article titled “As long as you are black, no one likes you”: Students allege racism during the escape from Ukraine” quotes a young black woman:

What are the implications of these claims for American foreign policy? Is the argument that Russia should be allowed free rein to kill Ukrainians?

The white world causes suffering and then says that the people of the global south are “uncivilized” with no rights that need to be respected. Ukraine has been pushed to the forefront of American thought in order to defend the imperialist foreign policy which led to the current conflict with Russia. If the blue eyed nation is suffering it is because of US and NATO arrogance and aggression. … [I]t is the white supremacist underpinnings of US/NATO foreign policy which have created all of Ukraine’s suffering.

These are bold — and extremely dangerous — claims, based on alleged student mistreatment and racist comments by officials in Poland, a grand stereotyping that seems to relish the deaths of blue-eyed devils in Ukraine. This article is the literary equivalent of a snuff film. Unsurprisingly, its agitating author offers no solutions in her conclusion:

The corporate media have joined the state in an extraordinary effort to create war propaganda. They deliberately tug at heartstrings and demand solidarity with Ukraine because the truth is very unpalatable. Instead of standing with Ukraine, Americans should stand with humanity across the world. If they did they would be better able to understand why there are wars in Europe or anywhere else.

Americans have many issues to weigh in the Ukraine conflict. Ukraine was part of the USSR from 1922 until 1991. America was not involved then; why should it be concerned with the country’s re-absorption now? After the recent debacle in Afghanistan, many Americans (especially those whose loved ones were killed or permanently marred by that conflict) may ask why Putin should be challenged if the U.S. will simply walk off the field in due course (and leave Putin some military hardware as a bon voyage gift). The Vietnam “conflict” comes to mind, too. And besides all that, the whole “preserving democracy” thing is a tad stale in the face of POTUS vaccine mandates and calling parents domestic terrorists.

The world’s power structure is wobbling, while racist SJW morons fiddle their vile tunes — as with health care, climate change, economics, immigration, etc. They seek to weaponize a real-life war into their ideological race-war arsenal.  Are they obfuscating this complex foreign policy area to support the president?  Or perhaps they are colluding with Russia.

The problem of clouding the issue with race is not limited to the left. As a Ukrainian writer recently opined:

Suddenly, a host of stories has appeared in conservative media that try to rally support for Vladimir Putin because he is allegedly fighting Nazis and the New World Order in Ukraine. … The Nazi smear is a twisted but effective technique used by Russian propaganda and our left-wing media in equal abundance. … Were there extremist or racist soldiers fighting in George Patton’s army? I bet there were a few, but it doesn’t follow that Patton was one of them, or that the U.S. Army had no moral right to fight Hitler and its victory was not legitimate.

America rebuffed Jews as refugees in World War II. Did that make the opposition to Hitler immoral or Americans complicit in a global white supremacy conspiracy in that conflict? That “blue-eyed” pejorative used to describe Ukrainians fleeing a massive assault by a military behemoth hints at naked racist hate. What difference was the color of the eyes (or skin) of Jews fleeing Hitler?  Where was the white supremacy in Americans dead or wounded in Afghanistan and Vietnam?

“Blue-eyed” conjures the hatred of Elijah Muhammad, later picked up by Malcolm X:

[T]his blue-eyed devil has twisted his Christianity, to keep his foot on our backs … to keep our eyes fixed on the pie in the sky and heaven in the hereafter … while he enjoys his heaven right here … on this earth … in this life.

The ADL, which platforms white supremacists on the Ukraine issue, claims that “blue-eyed devils” is a hate symbol used by whites. What then is NWA? Where has all that BLM money gone? Why have social justice warriors persistently ignored the oppression of Uyghurs, Jews, and other minorities that don’t fit their race narrative — perhaps “only African-Americans deserve peace and security”?

Throughout the BLM “movement,” the daily suffering of black Africans in abject poverty has been sidestepped. Social justice agitators now blame white supremacy for their plight, while those chanting “black lives matter” don’t care about those black lives one whit. Many (white?) Christian charities do.

The race-focused hatred against Ukrainians reveals the endless hate-cycle of the CRT cult. Sign-ups for the Indiana Active Club will doubtless escalate thanks to the ADL’s advertisement (much like a vaccine manufacturer unleashing the virus it reaps billions “curing”). Racists reap what they sow.

White supremacists reportedly differ on which side they support in Ukraine and rue the tragedy of white people killing other whites. The SJWs don’t care who wins, either. The only difference from their white supremacist counterparts is that they applaud blue-eyed devils killing one another.

7 thoughts on “John Klar: The war in Ukraine is racist, too!”