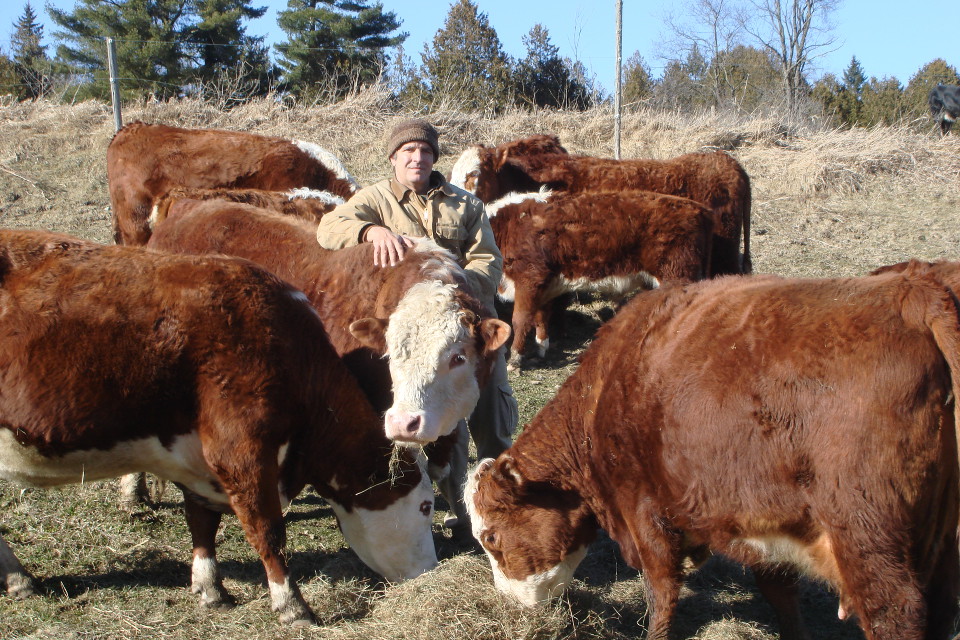 John Klar with his cattle

As discussed in a previous commentary, efforts are underway to create synthetic meats to replace cows. “Science” has discovered increasingly powerful ways to make junk taste like food, for profit. This includes tricking the tongue’s taste mechanisms, which “make food faster than drugs in exciting the brain.” (“Hooked: Food, Free will, and How the Food Giants Exploit our Addictions,” Michael Moss, 2021). To profit from vat-meat, costs must be addressed but also consumers must be persuaded to consume the stuff.

And that’s where the biggest lies about cows come in. The Gates/AOC/PETA effort is to peddle this garbage under the Orwellian label “Clean Meat.” As explained by the American Oil Chemists’ Society:

Also known as cultured meat, in vitro meat, or lab-grown meat, “clean meat” is the term preferred by proponents because the meat is reportedly cleaner than meat from slaughtered animals in terms of both sanitation and environmental friendliness. … The term “clean” may also refer to the conscience of the consumer because no animals must be slaughtered to produce the meat. Instead, stem cells are removed from an animal by a harmless biopsy and then cultivated in vitro to form muscle fibers.

The animals won’t be harmed, they will be eliminated:

Clean meat production is predicted to be about 6 times more efficient than conventional beef production. Because stem cells multiply exponentially, a herd of about 150 cows would be sufficient to feed the entire world, versus the 1.5 billion cows currently on the planet. … Fresh samples of stem cells would be periodically removed from live cows and proliferated, since stem cells can become genetically unstable after many divisions. Several companies are exploring options for maintaining genetic stability so that animals can be removed entirely from the process.

Imagine: Bill Gates and a few corporations will own not only all the patents to soybeans and other plants, but the means of factory production of all meats — and they argue that is a good thing for humans and the planet!

Only, it’s not. It is the opposite of beneficial for the planet. Vat-meat would be dependent on soy, corn or other plant-crops that are currently unsustainable, highly polluting, and poison humans with glyphosate and other chemicals. Industrial agriculture depends on massive inputs of fossil fuels for planting, spraying, harvesting, etc., but also for fertilizers made from costly natural gas. Rotationally-grazed cows (as opposed to CAFO animals) bypass these costs, vats don’t.

The net effect of cattle in the food system is to benefit the world’s waters. There is simply nothing better at absorbing, holding, and filtering water than lands densely covered by grass, and there is no better way to keep those grasslands biologically diverse, hydrated, and vibrant than by periodically grazing them. (p. 92).

It is intriguing to contemplate that the “ethical people” who elevate animals above humans seek to eliminate all cows to “save them” from suffering: “clean meat has the potential to drastically reduce the suffering of billions of common livestock animals such as cows, pigs, and chickens.”

Might humans be similarly liberated from life to save them from themselves? Curiously, the cow-concerned want to exterminate cows from the planet, and humanity’s only shot at preventing desertification and starvation along with them.

The far left are so far out on cow comprehension that they threaten the world. Replacing animals with Gates-patented stem-cell-vats to create steaks is horror-show Frankensteinian stuff, coming to a theater near you. Profiteer Gates must be viewed with skepticism. As Diana Rodgers and Robb Wolf pose the issue in their 2020 book Sacred Cow: the Case for (Better) Meat:

One must wonder how a row-crop-centric food system, which hinges on the use of these unsustainable inputs, can be put forward as a solution to global food security. (p. 129).

There is nothing to wonder about: this is all upside-down. Meat comes from sun to grass to animal and then back to soil, not the techno-vat cycle of industrial dependency and cancerous imitations of life. If cows disappear, humans will seek food by putting their heads in the sands that replace their decimated farmlands.

The answer is to free farm animals from industrial confinement, and use rotational grazing on pastures and fields to reduce the use of fossil fuels while rebuilding depleted soils. This will also reduce the need for antibiotics in livestock and thus the risk of foodborne parasites that breed in unnatural confinement facilities.

Let’s get cows, and our food supply system, right-side-up.

6 thoughts on “John Klar: Let’s get cows, and our food supply system, right-side-up”