The fallacy that America is “systemically racist” is rooted in arguments that the white majority suffers from subconscious racism which contaminates the entire “system.” Proponents of critical race theory and government-created “equity” insist they have yet-to-be-discovered solutions, including conditioning of those who suffer “white guilt” and white fragility.” President Joe Biden has eagerly joined this crusade to eliminate subconscious racism!

White Americans are kept in the dark as to the details of this enlightened reprogramming, but are told that the Bill of Rights is an impediment to these lofty new goals to eradicate systemic biases. The first step in eliminating subconscious racism is to stifle conscious thoughts: the liberties of Free Speech and Due Process are viewed as tools of oppression by the white majority. 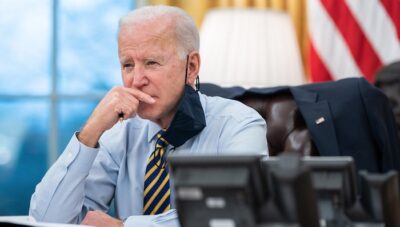 President Joe Biden declared that “he had a mandate to achieve racial justice and root out systemic racism in this country.” He defines neither what that term means, nor how he will eliminate subconscious bias.

It is axiomatic that government cannot eliminate subconscious racism. Yet, government can be very effective at fomenting racism, as numerous current and historical examples demonstrate.  America is about to try its hand at this folly.

Government conditioning to eradicate human evil is hardly novel. But what happens when government seeks to do great good, by conquering the individual human will to do great evil? How will the BLM Utopian Police State eradicate human racism? Is this not the same old reconditioning Kool-aid of Pol Pot and Mao, poured into newly-manufactured George Floyd bottles?

Anthony Burgess famously delved into this subject, in 1963. In his iconic novel “A Clockwork Orange,” a seemingly incorrigible criminal is redeemed using “science” — only, the experiment fails miserably. Burgess was delving into exactly the issue America’s extremist progressives deliberately obfuscate: the horror of government reprogramming.

In a 2012 essay, Burgess plainly explained what he had tried to express through fiction:

I had read somewhere that it would be a good idea to liquidate the criminal impulse through aversion therapy; I was appalled…. What I was trying to say was that it is better to be bad of one’s own free will than to be good through scientific brainwashing…. I have been derided and rebuked for expressing my fears of the power of the modern state—whether it be Russia, China, or what we may term Anglo-America—to reduce the freedom of the individual…. The behaviorist approach to man, of which Professor Skinner is a great exponent, sees him moved to various kinds of action by aversive and non-aversive inducements. Given the right positive inducements… we shall all become better citizens, submissive to a state that has the good of the community at heart. We must, so the argument goes, not fear conditioning. We need to be conditioned in order to save the environment and the race. But it must be conditioning of the right sort.

The goal of the “American Experiment” was to secure equal opportunity for all.  Efforts at “equity” aim for a sun that will melt the wings of such fairy-like dreams while depriving citizens of even an aspirational hope of equality of opportunity. Today’s quixotic, counterproductive BLM movement is no different.  One does not abolish racism by decree, any more than lewd thoughts. One conquers racism through love, not fear and hate.

This transfer of a sort of “dark-church” authority to the secular state is reflected in the COVID panic, and how quickly many Americans wish to abandon the Constitution in trust of Big Brother — and Big Brother Pharma. Orwell warned of the power of an omnipotent state to inflict unprecedented destruction upon the human condition. It is ironic that ALL Americans are familiar with Orwell’s books, but so few absorb that his warnings applied to all government structures — not just the Soviet Union.

Burgess explained that his title “Clockwork Orange” derived from “…an old Cockney slang phrase, implying a queerness or madness so extreme as to subvert nature, since what notion could be more bizarre than that of a clockwork orange?” Today’s world looks more akin to a “Clockwork Black,” in which the techno-state and modern alienation have pushed humanity far away from awareness of its own soul. Far too many Americans are lining up to be absorbed willingly into that dead machine.

[W]hen the social entity grows large, …the governing machine becomes remote, impersonal, even inhuman. It takes money from us for purposes we do not seem to sanction; it treats us as abstract statistics; it controls an army; it supports a police force whose function does not always appear to be protective…. The modern state, whether in a totalitarian or a democratic country, has far too much power, and we are probably right to fear it…. Pre-natal and infantile conditioning makes the slaves happy in their slavery, and stability is enforced not through whips but through a scientifically imposed contentment…. It would seem that enforced conditioning of a mind, however good the social intention, has to be evil.

Clearly, BLM activists (and Joe Biden) have not read Burgess. Antifa is well-steeped in blackness. The Clockwork Black, ticks.

And so Joe Biden declared that “… he had a mandate to achieve racial justice and root out systemic racism in this country.” As with other extremists, he defines neither what that term means, nor how he will eliminate subconscious bias. Instead he confidently proclaimed:

“Again, I’m not promising we can end it tomorrow, but I promise you we’re going to continue to make progress to eliminate systemic racism, and every branch of the White House and the federal government is going to be part of that effort….”

In addition to reinstating mandatory race theory training for federal employees, Biden proposes spending even more money we don’t have to fix a problem beyond the government’s reach. As with original sin, curing racism is best solved internally. It is a matter of the heart. If racism is systemic, meaning it is embedded in white people, how is it possible to eliminate it? Do those on the receiving end of discrimination have a role to play? This is a question Democrats never address. If spending money is the key to limiting racism, more progress should have been made by now.

Such common sense is shunned — soon it will be silenced as a typical gaslighting by a white person who must be silenced.  There are ominous harbingers from the Biden administration:

President Biden signed four executive actions Tuesday aimed at increasing racial equity across the nation, a move the administration said was a big early step in his efforts to dismantle systemic racism, though civil rights groups made it clear they will press for more-sweeping change in the months ahead.

Time will tell how effective this government is at sweeping away subconscious hatreds, rather than inculcate new ones. The ticking of the Clockwork Black grows audible.

How could such grand designs be anything but “good”?

John Klar is an attorney and farmer residing in Brookfield, and the former pastor of the First Congregational Church of Westfield. This commentary originally appeared at American Thinker.