A novel ideological experiment is being implemented on Vermont’s public school children, using critical race theory (CRT). As in science, it is best to test theories before constructing vast enterprises on an assumption that their premises are true. Instead, Vermont’s education system is revealing its lack of critical thinking skills as it thrusts a toxic, hate-filled, race-based invective onto Vermont’s children. Since educators can’t think critically, parents had better do so.

A single example will expose the vile filth that this ideological mission seeks to imprint on our youth, in an about-face of all the racial progress of the last 60 years. CRT rejects Martin Luther King, embracing a racist design to somehow heal 400-year-old grievances by weaponizing them for use against today’s Vermonters. The Essex High School has been teaching critical race theory, praising “Vermont poet” Rajnii Eddins as a hero of this new experimentation.

I have written about this man’s hate-filled drivel previously. To read his book, you’d think he suffered more as a black man in Los Angeles in the 20th century than Kunta Kinte did in the fictitious television series “Roots.” According to teaching materials praising Mr. Eddins:

He was the youngest member of the Afrikan American Writers Alliance at age 11 and has been actively sharing with youth and community in Vermont since 2010. His latest work Their Names Are Mine aims to confront white supremacy while emphasizing the need to affirm our common humanity.

This is a lie: there is not a single line about “affirming our common humanity” in Eddins’ work. Being 11 years old and black is not a claim to ability — unless one embraces CRT, in which case, being black and angry is the highest possible qualification for power and attention. As the accompanying school materials explain, race is the primary issue, not to be clouded by anything else. This is why this experiment has already failed and CRT is being prohibited in many states — it bases all outcomes on skin color, much like the Nazis (or eugenicists) claimed genetics was sole determinant in those ideologies. 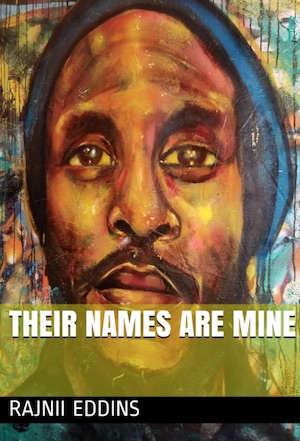 Their Names are Mine, by Rajnii Eddings

The case of Rajnii Eddins is instructive because in selecting his title, Rajnii reflected the selectivity of CRT — he claims the names of black victims, not black success stories. Martin Luther King’s name is not Rajnii’s, nor is Candace Owens, Thomas Sowell, Barack Obama, Colin Powell or Morgan Freeman. Rajnii picks black victims to champion as if black success is impossible; he picks victims to use as weapons against white people, not to “affirm our common humanity” — if he did that he’d have to take into consideration the black multi-millionaires, lawyers, and doctors that he ignores.

Race-baiting is rampant in 2021 Vermont — George Floyd is being recognized on Memorial Day; Gov. Phil Scott issues proclamations against racism; a farming bill seeks to give black people land justified by Vermont’s (non-existent) sharecropping laws; health and other racial disparities are legislatively declared to be caused by “systemic racism” without any actual proof; police are labeled racist for arresting black suspects regardless of whether they are guilty; legislation claims prostitution was prohibited in Vermont for racist motives.

Black economist and writer Thomas Sowell has for years tried to explain that equal outcomes are impossible: equal opportunities are the best that any society can successfully strive toward. Repeatedly comparing “social justice” with Marxism and Nazism, Sowell explains that the “seemingly invincible fallacy” is compounded by the failure of proponents to demonstrate a single case in history in which equal outcomes is even possible. In this Sowell highlights the failure of Vermont’s educators to prove the legitimacy of their uncritical arguments:

One can read reams of arguments that statistical disparities imply biased treatment without finding a single empirical example of the even distribution of social groups in any endeavor, in any country or in any period of history. … Nothing that we can do today can undo the many evils and catastrophes of the past, but we can at least learn from them, and not repeat the mistakes of the past, many of which began with lofty-sounding goals. (Discrimination and Disparities, pp. 216, 223).

CRT and the poetry of Rajnii Eddins single-mindedly focus on race, retribution, and hate: there is no desire for peace or civility expressed.

Here are some passages:

“Diversity is white people’s code word for n—.” (p. 17)
“It’s too big
Like giving birth to the earth through your d—
It’s too big….
Maybe this calm patient
Complacency
With our wayward nation
Needs an alarmed rage….” (pp. 43,44)
“Well they skinned that n— alive, That’ll teach him to look at a white girl.” (p. 53).
“If you got white skin and whatnot, then you profit from the psycho-social construct.” (p. 55)

The common theme is hatred of all white people for past wrongs:

“We need a white lives matter rebuttal
So white people don’t have to feel
So much human guilt from the blood spilt
They reap benefit from.
We need a true white pride movement
There must be something to be prouder of than accomplishments at others’ expense.” (p. 63).

But Rajnii’s hate, and CRT, do not allow for the possibility of a white existence apart from the collective sin of slavery. By CRT definition, and his words, all white accomplishment was achieved on the back of poor Rajnii — there is no success by white people that is not gained by exploitation, and there never will be. There is just retribution:

“We need some big payback for modern day Blacks
Origin of civilization’s under attack
We been plundered and jacked
Our numbers plummet
But we keep coming back….
I swear I smoke a jay a day
Just to get why we stay here
I’ve known the word n—
Since before I seen daycare
I know whites treat you different
Children got radar to hate and fear.
So when you tell me “Don’t Hate”
When I tell you my experience
It feels like you’re telling me
To cease to exist.” (pp. 67, 69-70)

There are numerous explicit calls for violence:

“The next time you wear a Native American costume
You will be scalped and hung
By the flag you hold so dear
The next time you wear black face
Tap-dancing in layers of burnt cork and grease
To mock our monstrous plight
It will become permanent
And none
Of your lily white loved ones
Will recognize you
You will be burned at the stake
Like only a true n—
Or a fa— could be….” (pp.80-81)

The very idea of common humanity is openly rejected by Rajnii in favor of a barrage of hate-mongering: lynchings, burnings, and rapes of black people are a part of white life per Rajnii, and police shootings of blacks are equated to public lynchings in the Deep South.

This exposes the truth that Thomas Sowell stresses: there is no end to the “reparations” or the white groveling for past transgressions. Rajnii and the school teachers who exalt him as visionary do not seek healing and reconciliation: they are sowing division and eternal conflict. Teaching white children to hate themselves, their families, their culture and their history is exactly what CRT is out to do, and why it is being banned in sensible states.

Rajnii hates white people for the sin of being white. He calls them nasty names, including ‘rattlesnakes’: “Do not compare the rarity of a rattlesnake-less White person To a polka-dotted unicorn.” (p. 89). Almost all of his poetry is overtly racist and hateful:

“But I’d rather see midgets f— nuns
Than see priests and nuns use church word
To f— the children of the sun
Let’s keep rebuilding til they come” (p.99)

Rajnii and CRT are not “rebuilding” — they seek to tear down the nation, culture, and Constitution, and they don’t even hide it. What they plan to “rebuild” is a race-based hell from which America will spend decades trying to recover.

Perhaps Essex High School will teach some Thomas Sowell — he grew up in Harlem, fought in the Korean War as a Marine, graduated magna cum laude from Harvard, earned a master’s at Columbia and a doctorate at the University of Chicago, and has published more than 50 books, largely on race and economics. Mr. Sowell is very kind in his words, offers hope instead of hate, and ideas to achieve that hope. Maybe the Vermont teachers plugging Eddins’ hate should learn about Sowell, and the numerous other black voices that do not scream an incessant hate-and-kill mantra against white people. Those books would be educational, not indoctrinational.